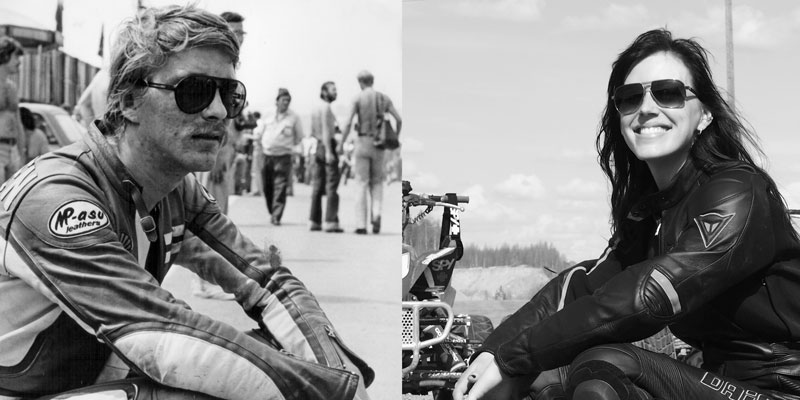 “..For me it’s not that important to have girls or women in motorcycling, but the most important thing is that all the people no matter what the gender is, are able to follow their dreams, do what they want and to have same possibilities as everyone else. If a girl or a woman wants to be involved in motorcycling I definitely would encourage them to do so because this is so much fun!..”

Nita, when we’ve spoken before you’ve told us about what a great source of inspiration your dad was to you and your career. Please can you tell us more about him and his career?

My dad Pentti Korhonen was a professional road racing rider back in the 70s when he competed mainly in 250 cc and 350 cc classes together with Giacomo Agostini and other big names. He achieved world championship bronze in 1975 and also won the Opatija GP then. All together he was on a podium ten times. My mum travelled with him and took care of his lap times, laundry etc. They were a good team.

Due to the fact that those days racing was extremely dangerous my parents wanted to wait until my father quit racing before they had kids. He ended his racing career in 1979 and I was born in the beginning of 1981. I was six months old when we went to Finnish GP with my parents to meet their friends. So that was my first GP visit.

Naturally, we have always had many guests from all over the world at my home, his racing friends, mechanics, team managers etc., so I really enjoyed talking with them and listening to their stories of the wild paddock life!

Did he encourage you to get started in motorcycling?

I don’t think my parents really encouraged me to start motorcycling, especially my mum who witnessed so many serious and fatal accidents during those years when they were traveling with the Continental Circus. She was not really that keen on the idea that I would also start racing which actually I told her several times as a kid that I would do.

I think I was around three to four years old when my younger brother and I got our first moped. My parents have always let me and my brother to follow our interests, so I was pretty much doing everything I could as a child from ballet to riding bikes and from horseback riding to being a girl scout.

Were there any other girls there too when you started out?

I am from a small town which is really active in motorsport but there were not that many girls who were interested in motorsport. I think I was the only one but for me it has been always same if I was riding or racing with boys or girls.

I took part of my first off road competition when I was around six or seven years old as an only girl. A few years ago I was competing in ATV Supermoto Finnish Championship series, again as an only girl. Luckily these days more and more girls are involved in motorsport.

What was the best piece of advice your dad gave you? 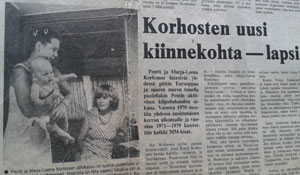 I think for me it has been really important that my parents and especially my dad always had the attitude: “Just go and do it.” He lent me and my few girlfriends his car after my graduation so we could go and travel around Europe. My parents realised how fortunate they were when they were able to spend their youth all over the world so they have always encouraged me and my brother to follow our dreams and highlighted that anything is possible if you just want something and are willing to work for it.

Did you ever feel intimidated by the male dominated environment?

I have always had both boys and girls as my friends so for me it has never made any difference which gender people are and I don’t think I have even realised that I am in a male dominated environment. But then again I have never been one of those girly girls who are afraid of having dirt in their hands so still now we often have “boys’ nights out” or we go to race together, me and all the boys.

Did you have any female role models in the sport?

When I was a child there were few female racers like Taru Rinne from Finland who gained world championship points in road racing, but I never felt like I should have a female role model. I have actually never thought about famous racers or world champions as role models or idols. Our home was always full of world champions and medallists, but for me they were just nice people who came to see my ballet dancing shows or horseback riding.

How does it feel to be a role model yourself now?

I understand that as a Commission Director at the FIM, people are more interested in what I do and what kind of decisions our commission makes what comes to women’s motorcycling. It is sometimes funny when people recognise me in different countries and are so interested in our discussions, but in the end it’s just good for the whole industry when the interest in women’s motorcycling is growing all the time.

I really try to do my best to improve the situation in every country and discipline. I still race sometimes myself so I really have to focus on being as neutral as possible in everything because sometimes it is a bit challenging for some people to see the difference between me as a private person and me as a commission director. But so far everything has gone really well and I am changing disciplines from racing to street riding (and also brands). I think it’s just positive that I can get a wide view from the whole industry.

Would you have any reservations about encouraging other girls and young women to get involved in the sport?

For me it’s not that important to have girls or women in motorcycling, but the most important thing is that all the people no matter what the gender is, are able to follow their dreams, do what they want and to have same possibilities as everyone else. If a girl or a woman wants to be involved in motorcycling I definitely would encourage them to do so because this is so much fun!

How is the sport changing and how are motor federations and manufacturers supporting women who want to take part in the sport? 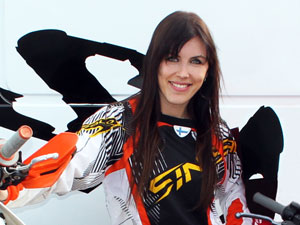 I am extremely happy that the federations and manufacturers are these days working so hard to get more women into the motorcycling! I was just in Lebanon where they organised their first Women in Motorcycling seminar. Many Middle East countries are really doing a lot at the moment to improve the situation of female riders and this is just brilliant.

Also many manufacturers are at the moment making more that kind of bikes that would attract more women as they realise how important it is to get new target groups. So a lot has happened just in few years and I am so grateful for all the efforts everyone are doing at the moment!