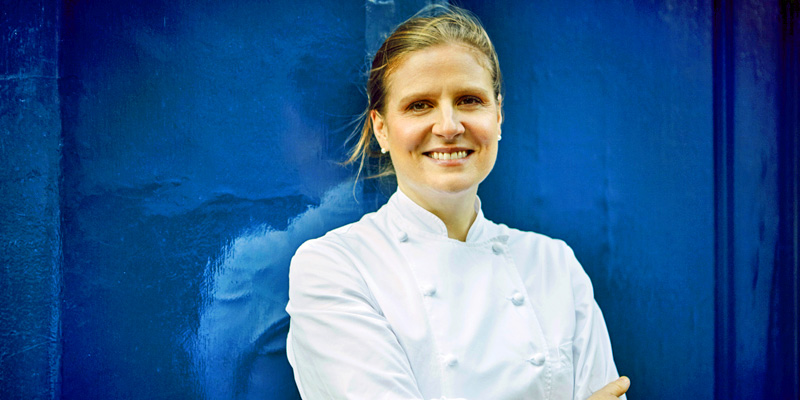 “…I’ve worked with three male mentors and they have all been very supportive of me, allowing me to develop and grow. They never quashed my ambitions and ideas –  rather they encouraged and supported them…”

From New Zealand to The Savoy

I’m from New Zealand originally and I always loved cooking and food. It has been part of my childhood. Growing up, were assigned chores and cooking was one of them. I had an aunt and uncle who had a fruit orchard in New Zealand and my father grew his own fruit and vegetables too, which he would bring in from the garden. It was a big part of my growing up and one of things that I loved.

When I finished high school, I did not really know what I wanted to do, so I decided on something that was broad so I could make decisions later. I chose to study Law and Commerce at the University of Otago.

Whilst I was studying I thought: “Why don’t I go and look at getting a job cooking?” and I approached my favourite local restaurant. I explained that loved to cook, I needed a job and they basically gave me a chance. From that point on I did lots of baking, made muffins and quiches, slices and cakes. I absolutely relished my time there.

Whilst I was on a holiday break from university I found a good job at a boutique hotel that had a restaurant attached to it. I applied for a role as a kitchen hand and I was offered the job there and I ended up working as a chef. I was there about a year and a half and that’s where I learned the most – it really grounded my love of being a chef. I was still studying at the time whilst spending time in the kitchen.

Being discovered through Chef Search

At the end of my degree I carried on working at the restaurant as a chef. I also spent two years working in investigations for the New Zealand Banking Ombudsman. One day, I was reading our local New Zealand cuisine magazine and I saw an ad for Chef Search, Gordon Ramsey’s Chef Scholarship competition, which was taking place in New Zealand in 2004.

I thought it sounded like something for me, so I submitted a three-course dinner menu with all the recipes. I didn’t think any more about it until I got a phone call about two months later saying that I had made it through to the final.

As a result of this I met Josh Emett, a famous chef from New Zealand, who at that time was working for Gordon Ramsay at The Savoy Grill. This meeting resulted in him offering me a job in London. So, I went into work the next morning, handed in my notice, got my visa, jumped on a plane and that was that. I worked at The Savoy Grill for just over a year and a half.

I started working with Marcus [Wareing] at his restaurant ‘Marcus’ at The Berkley in 2008. During this time, he realised I could do other things in addition to my role as sous chef. He was working on a cook book and he wanted some support so he asked me if I was able to do the work, to which I eagerly said: “Yes, of course!”

He wasn’t aware I hadn’t trained as a chef, and was able to use a computer.  It was important to me that he saw I could do some other things as well, and that is the kind of relationship that we now have where I’m taking an operational approach. I took on a broader role including oversight of human resources, operations, finance and those sorts of things, whilst still being in the kitchen.

A couple of years after this we were approached by the owner of the St Pancras Renaissance Hotel, as it was being developed. The owner wanted us to go and look at it with a view to getting us involved in the restaurant, so I went along with Marcus and his wife and Jane. The three of us were rather wowed by the place.

So, I went from working in kitchens to opening The Gilbert Scott as general manager. I had a really, short, sharp learning process about to how to open a restaurant and run it. I learned everything from what you have to do with a listed building, contractual agreements, working with the owners of the hotel, operations, reservations, marketing, PR – the whole process.

A return to the kitchen at Tredwells

About three or four years into running The Gilbert Scott we had built really good team, but I was concerned that some people in our group needed new challenges and that they might leave if we couldn’t create new opportunities for them. I was ready for something new as well so we started actively looking for a new site.

I was having dinner across the road from what is now our Tredwells site in the Seven Dials area of London’s West end, and I walked out and saw right in front of me a sign saying “Restaurant site for lease”. So, I called the agent (who I actually knew) and asked if I could come and have a look. When I looked around I intuitively knew it was right.

We opened in 2014. I was out of the kitchen all the time managing, running the operations and doing business development. When we eventually opened the restaurant, I felt the food wasn’t quite in the right place. Our head chef decided to move on so I decided to get back into the kitchen.

For me, it was more of a temporary move, but when I got into the kitchen again I realised it was the place that I loved. I was able to still run the operations as well, whilst my creative outlets of cooking and also nurturing the team enabled me to drive it forward. I haven’t looked back since.

The value of a female approach

Is high end cuisine male dominated? I hesitate to use the word ‘dominated’. Traditionally there has been a much higher proportion of men to women, certainly in London restaurants, and it was an environment that was not particularly female friendly. However, I am pleased to say that I never experienced any feeling that I did not belong. There were times when I was the only woman in the whole kitchen, but it did not phase me and I didn’t feel at a disadvantage.

It was something that I was conscious of but it never became an impediment. I think women can probably can be put off by the image the industry has built up over the years but I’m glad to be in a position to be able to try to influence the situation and bring about a positive change. I want to encourage more women to come and try roles like mine.

I have been lucky working with chefs who value a female approach in a kitchen. The thing my mentors have in common is they all love food and they want to do the very best they can. I’ve worked with three male mentors and they have all been very supportive of me, allowing me to develop and grow. They never quashed my ambitions and ideas –  rather they encouraged and supported them. I have been very lucky in that respect because they are people who are very pro success.

My advice is if you do really want something, you need to put your plan into action to make it happen. It is not about others, it is about you. Success is partly about setting your goals and sticking to them but it is also about allowing them to move and shift. I think its understanding what exactly is going to make you happy, which is different for every single person.

My advice for anyone who wants to come into this industry is: Just do it. We are in a period where there is a chef shortage, so in this environment most restaurants would probably welcome somebody who takes a proactive approach. I got my first chance quite literally by knocking on a restaurant door and asking if they had any jobs.

Also, if you start on one career path, it does not mean that you have to do that for the rest of your life either, so if you like the idea of this career or that, you have to give it a try.

I am going to be in New Zealand on International Women’s Day this year. I am going back to cook for a vineyard that I love called Seresin that was founded 25 years ago. It is their 25th anniversary so we are doing a series of events to celebrate that. It will be incredibly special to be cooking again in the country where I grew up. I’ll be in a beautiful part of the world doing the thing I love, so it really doesn’t get better than that.

Although I have never felt that I have been hindered in my progression, I think that there is much out there still to do. I believe in celebrating what individuals can bring. There is a huge amount of potential in women whether in third world countries or whether it is disadvantaged women in this country.

Looking back, I have been very lucky. I am from New Zealand, a very progressive country – we were the first country to give women the vote. It has always been a way of life that I have enjoyed, so for barriers are not something that I have been exposed to. I’d like to use my position to help remove barriers for other women. I think we can all #PressForProgress for women by celebrating unique, attributes women have and being able to push those forward.

Aside from Tredwells, the big focus this year is my book, Planted, which is out on the 19th April. I have just got the very first copy in my hand and I’m extremely excited! It is my first solo cookbook, where I show you how to cook delicious plant-based dishes using seasonal and flavoursome ingredients. Everybody, me included, is becoming increasingly conscious about the way we treat our bodies, what we put into them and about what is going on in the bigger picture in the environment. We can all definitely do with eating more plant-based foods, so let’s celebrate that.