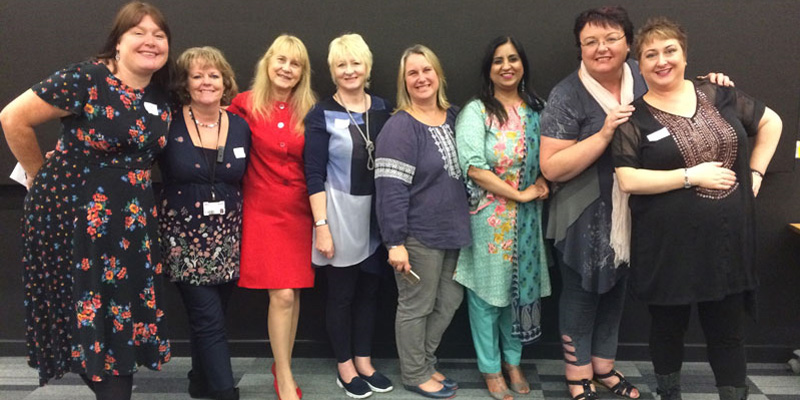 Sameena Choudry is founder of Equitable Education, an organisation that works with schools, local authorities and educational organisations to provide capacity building, training and consultancy services for target groups of pupils for whom closing the gap is an issue. She co-founded the grassroots gender equality movement for women in education, #WomenEd, and she is a one of their national leaders.

I’m very fortunate it that I’ve had a very successful and rewarding career in education for more than 30 years. I started off teaching in secondary schools and primarily schools that are termed as being in ‘challenging circumstances’.

During this time, I have also had the opportunity to work as a lecturer in college and as a Postgraduate Certificate of Education (PGCE) course tutor at Sheffield Hallam University, as well as regularly providing training to Bachelor of Education (B.Ed) and PGCE students at the University of Sheffield. Whilst working as a senior leader in various schools in Sheffield, I also undertook work for two examination boards as an examiner and question setter for GCSEs and A-levels.

I gained considerable experience working as a cross-phase teacher adviser in Sheffield, progressing to Head of Service in North Lincolnshire and for three years, prior to setting up my own educational consultancy, Equitable Education. I worked as a senior adviser for a Closing the Gap programme in Leeds local authority. Prior to this I have also been a member on the Newly Qualified Teacher Appeals Panel on behalf of the Department for Education (DfE) and an advisory member to a number of national organisations including Centre for Information on Language Teaching (CiLT).

I have been a successful head of service in three local authorities. During these roles I have worked with many heads, senior leaders and colleagues across early years, primary and secondary schools by providing support, challenge and advice.

I have considerable experience of working with senior colleagues within local authorities, mainly within school improvement but also with other services to provide strategic support for closing the gaps and delivering continuing professional development (CPD) to schools and colleagues within schools and in local authorities. Early on in my career I become an accredited Ofsted inspector and I regularly write on educational matters for a variety of publications.

Passionate belief in the power of education

I decided to pursue a career in education because of my passionate belief in the power of education to transform not only the lives of children and young people but whole communities too. As my career progressed I became increasingly interested in working with children and young people who, with additional support, could reach their full potential and developed expertise in this area.

My particular specialism is ‘intersectionality’ i.e. looking at the overlap of needs of children who can benefit from additional support so that effective holistic strategies can be developed to meet their needs. Over time it became increasingly evident to me that teachers are not given adequate training or professional development either through initial teacher training or on-going professional development for children and young people with specific needs who needed additional support.

This led me to found Equitable Education so that I could work along schools to build capacity to address the specific needs of pupils and through this raise their levels of attainment.

I am incredibly blessed to undertake a wide range of roles which vary considerably. This can range from managing a team of staff and ensuring they are effectively deployed into schools, to delivering professional development for teachers and senior leaders. At other times I can be in a meeting discussing and developing strategy or working alongside parents and carers to co-produce events.

I also undertake research on matters related to my work and regularly write articles and blogs on a range of matters so I can often be either researching or writing. In my spare time I’m often, like my #WomenEd co-founders, involved with either organising events or taking part in them. There is never a dull moment!

The story of #WomenEd is quite remarkable really. It started in the spring of 2015 when one of our original co-founders, Helena Marsh, attended a conference called Empowering Women in Education Leadership, which brought together existing and aspiring leaders from both the state and independent sector to focus on the issues they faced.

The day inspired Helena to write a blog post called What glass ceiling? in which she highlighted the key messages from the conference. This led to former head Jill Berry commenting and responding with a blog of her own called Lost Leaders reflecting on the issue of women leaders and what might hold them back. In this blog Jill states:

“…I have also known women I think of as the ‘lost leaders’, those who could have been exceptional leaders and role models but who, for a variety of reasons, didn’t fulfil their leadership potential. And this has made me thoughtful. Are there acceptable, and also unacceptable, reasons why this happens?..”

Both these blogs resonated with many women in education who read them, including a group of seven us and before we knew it we were in the middle of organising an unconference for 200 aspiring and existing women leaders in education on the 3rd October 2015 in the London offices of Microsoft as they had kindly offered to sponsor us.

We decided on an ‘unconference’ format to enable participants to speak in a variety of ways ranging from keynotes, workshops to leading discussion groups of varying sizes. This format facilitated our approach of supporting one another rather than leading as an expert.

This unconference was organised by the seven of us through a chance encounter on Twitter but with a shared powerful interest in addressing the issues facing women in education. What was remarkable was that not all of us had met until the night before the unconference but it felt that we had known one another for ages.

I don’t think any of us expected that this was the start of something so big. The day of the unconference was just amazing and electric, with a buzz of excitement and collegiality so resonant amongst all.

This unconference has led on to many more events including two further annual unconferences – one in Microsoft’s offices in Reading in 2016 and the other at Sheffield Hallam University in 2017. In between, we have formed regional teams and a wide range of events have taken place so far.

By the time of our second anniversary in spring 2017 it had led to a growth of 15k followers, 500+ blogs being written on gender equality in education and over 3000 colleagues having attended our regional, national and international events. We were also cited in the DfE White Paper, Educational Excellence Everywhere.

We have still to calculate the impact over this year! In addition, research on #WomenEd has been undertaken by Dr. Kay Fuller of the University of Nottingham and Dr. Jill Berry with a focus on why and how it has developed and the issues it has raised.

Since then #WomenEd also been shortlisted for the Outstanding Diversity Network Award at the Excellence in Diversity Awards 2017, won a book deal with Sage publications (due for publication in 2019) and also been invited to attend the Department for Education (DfE) Equality and Diversity Roundtable in January 2018. We were also cited a one of the top ten influential figures by the Times Educational Supplement in December 2017. 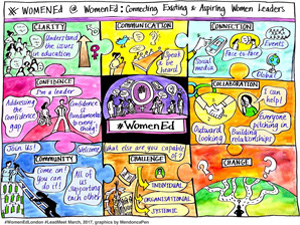 When we set up #WomenEd we were conscious of the need to be inclusive of all women and had a keen focus on ‘intersectionality’. Indeed, this was the focus of my talk at the launch of #WomenEd at our very first unconference and it features within our key values of clarity, communication, confidence, collaborate, community, challenge and change.

The success of #WomenEd has led to the formation of #BAMEed, #DisabilityEd and #LGBTed, which have all been supported and encouraged by #WomenEd, with colleagues taking an active part in #WomenEd events but also to form their own grassroots movements with their specific focus. We certainly believe in the power of collaboration and feel that through a collective community change will take place. 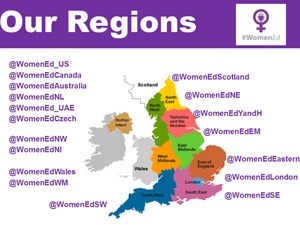 #WomenEd has gained so much momentum because it is a grassroots movement which resonates. Education is a field in which women dominate the workforce and the barriers and rewards of being a female leader seem to be very much the same regardless of geographical boundaries.

Social media and Twitter in particular has enabled people hitherto physically unconnected to join in with this movement through writing blogs and connecting with like-minded colleagues across the world. Just as our regional networks were developed in our second year, we have grown internationally this year in particular.

Some of these international networks have grown through professional links with exiting members and others through social media. The world certainly seems to have become a smaller place.

Microsoft has been a partner from the start and have been kind hosts of our first two unconferences, including sponsoring our third conference in Sheffield. They also built Yammer for us, a social media platform so that we could engage with other #WomenEd members.

These strands are to:

There are lots of issues that still need addressing in relation to gender equality within education such as:

#PressForProgress gives us a platform to highlight these issues and also look at actions to address them. We know that there is so much more that still needs to be done in terms of gender equality and parity, so we need to accelerate progress towards achieving this.

Furthermore, for me personally, it means looking wider and looking at the issues facing girls and women across the world where they are denied their basic human rights. Issues such as child marriage, access to schooling and health care, higher mortality rates and lack of nutrition etc. still need much focused work and renewed action. It’s important that as we #PressForProgress on the issues that affect us we don’t lose sight of those that are affecting girls and women globally. 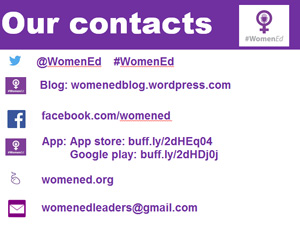 We have shared values and interests with the readers of Womanthology and welcome their engagement in both discussions and debates, as well as active engagement in our many events held across the UK and increasingly internationally too. Details of how to get involved are provided below. We would also welcome perspectives from colleagues outside of education and encourage your readers to share common issues, solutions and good practice through our #WomenEd blog.