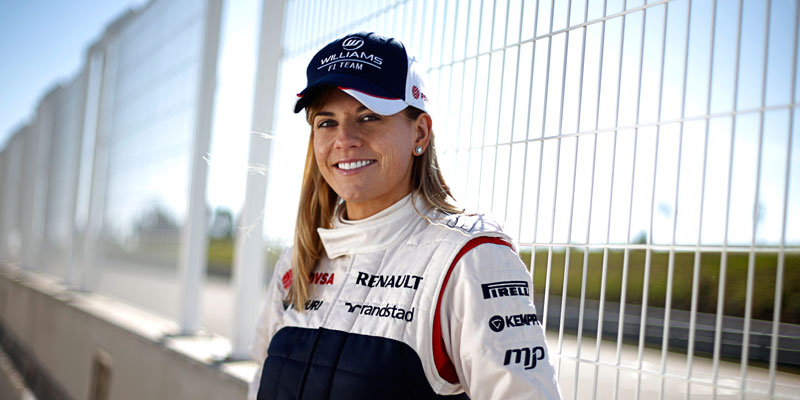 Susie Wolff has just been announced as the first female driver to compete in F1 Grand Prix season in two decades. She has defied critics with her meteoric rise through the ranks of motorsport, starting off in karting, then moving up to Formula Renault and Formula Three, before moving to compete for Mercedes-Benz. In 2012, she was signed by the Williams Formula One team to work as a development driver. Susie will continue in her role as Development Driver for Williams in 2014 and will become the first female driver to compete in a Formula One Grand Prix session.

“…It’s not about being a woman; it’s about being the absolute best you can be in the sport…”

I am really proud to be taking this next step in my racing career with Williams. It’s not about being a woman; it’s about being the absolute best you can be in the sport. I’m grateful to Williams for supporting me and giving me more responsibility within the team. 2014 is going to be a real milestone in my career. I have a big opportunity and I’m going to grab it with both hands.

I was asked by Womanthology to offer some advice to other women. I advise women that they should never give up – I believe in finding your passion and following your gut.

Joining Williams F1 team has been my greatest professional achievement so far, but I encountered many obstacles along the way; I broke my ankle in 2005 and lost my F3 drive. Fast forward a year on and things were much more positive for me – you must not give up.

It’s clear that it’s a male dominated sport. However, when the helmet’s on nothing else matters but performance. My driving style doesn’t differ from my male competitors – the skills needed to be fast are the same. My performance on the track does the talking.

I’m lucky that I love my work, so it’s not as important for me to find a balance as I enjoy it so much. My husband works in the industry, so we often get to travel together.

Women rising by their own merit

I’m a FIA (Federation Internationale de l’Automobile) Women in Motorsport Ambassador. FIA is a network whereby we support one another and raise awareness that the track is a place for women. Women are rising throughout motorsports by their own merit. It’s already happening in an organic way. The more successful women are in the sport, the more inspiring it will for others to get involved.

I’d advise women in male dominated careers that you have to make the environment your own. Make your own success and don’t worry about gender.

Motor sport is so fast paced that you cannot look too far ahead, but in ten years’ time I would like to be focused more on the business side of F1, I have been so inspired by my husband Toto Wolff’s work.

I’d like to congratulate Womanthology on its launch and wish the magazine and its readers all the very best for the future, whatever their ambitions might be.

Remember: Never give up…