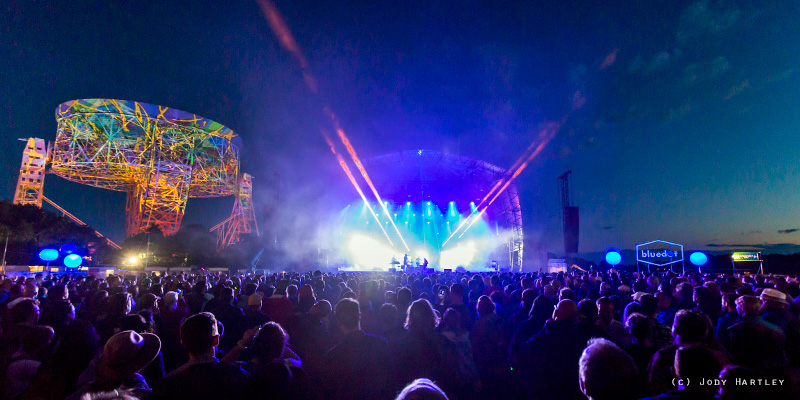 Professor Teresa Anderson MBE is Science-Culture Director of Bluedot Festival, Director of Jodrell Bank Discovery Centre, as well as being Chair of the Daphne Jackson Trust. Bluedot with OVO Energy is an award-winning festival of discovery at the grounds of a deep space observatory. Set against a backdrop of the iconic Lovell Telescope at Jodrell Bank, Bluedot combines music with a ground-breaking programme of live science experiments, expert talks and immersive artworks.

“…Bluedot was launched in 2016… As well as being an amazing summer music festival with a fantastic culture programme, it is also now one of the UK’s leading science festivals, with an astonishing amount of science content packed into two and a half days…”

Studying science to ‘do something useful’

I was always fascinated by how things work, especially things like the Apollo missions to the Moon, and that led me to study physics and then do a Ph.D. in Electrical Engineering. Somehow (I think I was quite absent-minded at school) I missed the idea that physics wasn’t a typical choice for a girl and remember being surprised that there weren’t more of us when I arrived at university.

I remember thinking that I wanted to ‘do something useful’, so my Ph.D. focused of renewable energy systems for remote communities in developing countries. I went on to work for the charity Practical Action, looking at energy supplies for communities in some of the poorest countries in the world. It was a real eye-opener and made me very passionate about the way that we use science and technology for good or for ill in the world.

Building on that, I wanted to work in science policy and public engagement with science, as the democratisation of science decision-making is becoming increasingly important. My job at Jodrell Bank is all about connecting people with science, inspiring the scientists of the future and also provoking informed debate about science and engineering.

I’m Director of the Discovery Centre at Jodrell Bank, which is the ‘public-facing’ element of the Jodrell Bank Observatory site. I’ve built the Centre up from scratch, raising funding for and overseeing the development of the buildings that opened in 2011 and then developing the Centre further from that point.

We launched a new schools programme in 2012, and now welcome over 22,000 school pupils per year, along with around 150,000 other visitors. The Centre now has three main buildings, as well as 35 acres of beautiful gardens, with loads of things for families to do. It also has a wonderful café – which, as far as I’m concerned, is one of the most important elements of a visit.

The Centre is part of the University of Manchester, but doesn’t receive much funding, so is operated as a social enterprise, deriving most of its running costs from its business operations. I’ve built up the staff team from five to around 40 in the last five years, and I am incredibly proud of the brilliant people I work with.

The site is spectacular, as it’s dominated by the iconic Lovell Telescope, which is Grade 1 listed. It’s all the more spectacular because it’s a working science site, which is carrying out observations of objects far out in space, 24 hours a day, 365 days a year.

Bluedot is one of the more exciting elements of my job!

We’ve collaborated with the team at From the Fields (who run the wonderful ‘Kendal Calling’ festival) on one-night gigs / music events here on site since the Centre opened. In fact, as far as we are concerned, they are ‘science engagement’ events as well as music events, as we have always called upon all our colleagues here at the Observatory and across the university to provide lots of content about their research for people who are attending the festival.

Our reason for doing them is that they attract people who wouldn’t typically visit a ‘science’ attraction, which means that we extend our reach to new audiences. A couple of years ago, we realised that it would be far less pressure on the site (and the surrounding road infrastructure etc.) if we ran the events as a camping weekend festival rather than one-night events and Bluedot was launched in 2016.

As well as being an amazing summer music festival with a fantastic culture programme, it is also now one of the UK’s leading science festivals, with an astonishing amount of science content packed into two and a half days. 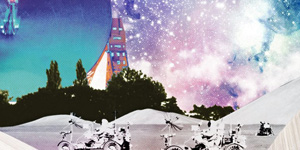 This year we have a superb music line-up (I’m very excited about Goldfrapp and the Pixies) and the talks and activities programme is mind-blowing.

On the science front, we have persuaded not only our colleagues here at the Observatory to be involved, but also people from many of the major science organisations across the UK to join us. There are over 50 science speakers alone, on topics ranging from the Search for Extra Terrestrial Intelligence to Spider Silk, Rocket Women and the Northern Lights.

As well as that, we have a full family programme, with some exciting science shows (with lots of explosions) and our famous Star Field fairground, with hands-on experiments from over 200 scientists for everyone to try.

I think it’s going to be amazing – and we’re planning on it being around for the next ten years, so it would be great to see Womanthology readers joining us.

Work of the Daphne Jackson Trust

I do a lot of work on inspiring the scientists of the future – and have a personal commitment to encouraging girls and women to choose and pursue a career in STEM (science, technology, engineering and maths). However, that’s just the start of the ‘pipeline’ for a career in STEM – and one of the things that’s apparent is that the pipeline for a career in science or engineering research is very ‘leaky’ – i.e. the proportion of women who progress in their career falls off at each career stage.

Some of this is due to women taking career breaks to care for young children or elderly family members. The Daphne Jackson Trust works to return people (men and women, although it’s predominantly women) who have had a career break of this nature back to research. I’m very honoured to be Chair of the Board of Trustees of Daphne Jackson Trust – the team does a fantastic job and we are all very proud to be able to support the work of the Trust.

I think that it’s clear that academia (and specifically STEM subjects) are dominated by men. There are many studies on why this should be the case and their findings are rarely surprising. Although we do now see higher proportions of female undergraduates than in past years, the fall-off in numbers moving to more senior levels in their career is still marked and it’s a problem that needs much work.

There are some great schemes around that are encouraging universities to address this (e.g. Project Juno, run by the Institute of Physics) and funding bodies now require research teams to address their gender balance. Personally, I’m keen that work such as that done by the Royal Society on unconscious bias is rolled out far more widely. We just need to keep pressing forward on every angle.

Banishing outdated stereotypes that girls can’t do science and maths 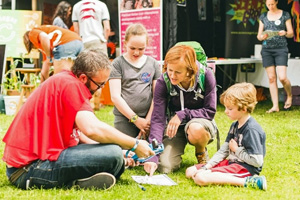 I must say that things have improved vastly on this since I was an undergraduate physics student in the early 1980s (the proportion of females in my year was 3% and it’s now around 20%) but there is still a long way to go in some areas. There’s a massive community of initiatives in this area and I think it’s really making a difference.

They include things that are very formal, such as Government initiatives and programmes from the Royal Academy of Engineering, and the Royal Society – and then more informal initiatives such as Women in Science and Engineering (WISE), Science Grrl, Girl Geeks etc.

Here at Jodrell Bank we do lots of work on diversity in science (our Education team here is largely populated with female physics graduates) including our pioneering ‘Girls Night Out’ events.

I’m currently leading on Jodrell Bank’s bid to become a UNESCO World Heritage Site. We are now on the shortlist, and although it’s a huge amount of work, I’m hopeful that we will move towards full UNESCO inscription in the next two or three years.

At the moment I’m also working on a project to create a new gallery building, the First Light Pavilion here at the Discovery Centre that will focus on the heritage of Jodrell Bank. We have already been awarded £12 million from the Heritage Lottery Fund for the project, which is fantastic, but I do have another £5 million to raise fairly soon, which is a challenge. The new Gallery will allow us to welcome even more visitors to the site, which would be lovely.

One thought on “The intergalactic festival where music, science, arts, culture and the exploration of space meet – Professor Teresa Anderson MBE, Science-Culture Director of Bluedot”