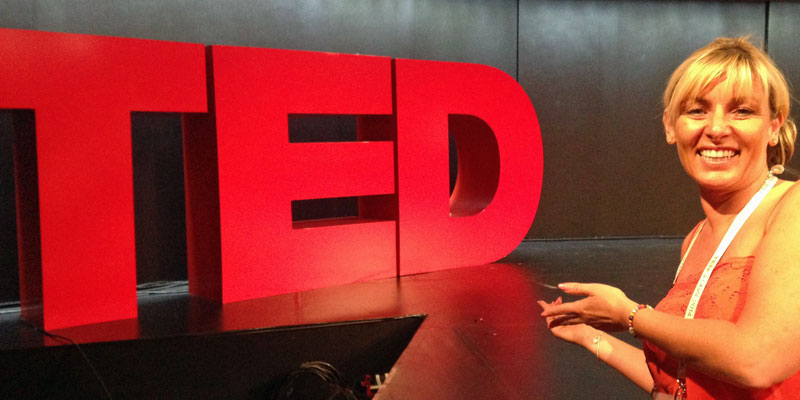 Simone Roche is founder of Northern Power Women, managing director at event curation company Events 1st, a director at the Association of Women Travel Executives and licensee for TEDxWhitehallWomen, developing a specialist network of members and a portfolio of events, including the Women 1st Conference and the Shine Awards. She joined the Royal Navy at 17 as a radio operator, scaling the ranks up to Lieutenant, before roles including looking after sponsors for London 2012 as a client services manager, events and sales management roles at Blackpool Pleasure Beach and Aintree Racecourse, eventually becoming deputy general manager of operations for the build of the new Echo Arena in Liverpool. Simone is passionate about talent and stepped into gender diversity at People 1st, the workforce development charity for skills in the visitor economy.

Simone is licensee of TEDxWhitehallWomen that took place on 29th May 2015 at The Ambassadors Theatre in London. Simone is a TEDx franchisee. TEDx was created in the spirit of TED’s mission, “ideas worth spreading”. It supports independent organisers who want to create a TED-like event in their own community.

Setting up my own TEDx events: A different way to share ideas

It all started three years ago with a conversation with a lady that you featured in Womanthology a few weeks ago – Ruth Shaw. We were having a conversation about what I was doing around gender balance, what she was doing in relation to a few initiatives she was involved with. She was considering getting into the world of TED and said, “Do you fancy it?!” And I said, “Absolutely, as I pretty much say ‘yes’ to most things supporting women in business.

TED events can only thrive on that collaborative kind of will because they’re independent and not-for-profit. You have to be driven by something else. One of the things that the whole stage and platform TED gives you is that you can speak to people who you’ve been inspired by or know have inspired others in the audience, so it’s a different way to share their ideas.

Passionate about TED: Getting up close and personal

We all listen, engage and are inspired in different ways. The lovely thing that I find about TED and TED talks is that you can listen to four different ones back to back and you can go from someone who is a rocket scientist, to somebody who is a performance artist, to somebody who is talking about something very personal and emotive that has happened to them. There is something within them.

The key part is you can go and hear many speakers with who want to give maybe five, six, maybe ten key bullets of inspiration, but with TED it’s about one. It’s one nugget that is their one idea worth sharing and it’s the way that it is ‘storytold’ that I love. It brings the personal side out from the experience or it brings the story out in their journey.

The whole ‘idea worth sharing’ so to speak is delivered in a more natural way, not really behind a lectern. You take the centre of the stage. There’s always a red dot on the stage, so it brings the speech to the centre and it almost brings the speaker into the audience. The whole ethos is to speak from the heart and express your idea, making sure it’s genuine, real and authentic, so you don’t need notes.

One of the things that I love is the diversity of talks: Last year at TEDx we had a young woman from the Prince’s Trust followed by a millionaire, and the fact that both of their talks can be listened to and downloaded in Cardiff, Mozambique, Australia…. wherever – it’s an opportunity to share globally. Talks have to translate and be relevant to the live audience but also in a way that can be understood anywhere.

The big thing for me is that there’s no two the same and you can’t replicate or copy someone’s style. It’s about being you. It’s a showreel for your vision and values. It doesn’t matter whether you’re talking about curing an incurable disease or climbing a mountain – that TED environment is about demonstrating what you are, your DNA, your vision, your values, your authenticity. The best TED talks bring that out in people 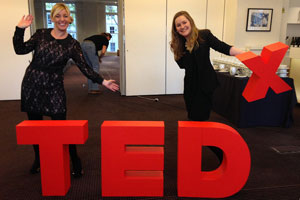 TED.com has been around for thirty years and six years ago the TEDx concept was created to empower communities and individuals to host independently organised events to widen the ‘ideas worth sharing’ landscape.

To become a licencee you have to apply to TED in the States – it is a lengthy online process because they’ve got a big brand to protect and nurture. You submit your budgets, team and sponsors and once you’re accepted off you go – there is wide resource and support from the TEDx community online which is most useful. When you first apply for a license you can only host events for 100.

There’s a number of different types of licenses. You don’t have to just do TEDx. There’s TEDSalons, which are smaller get togethers, whereby you get people together and you discuss existing TED talks. Or there’s TED-Ed that’s a TED education programme, which is about writing your own lesson plans.

There’s TEDxYouth. Each of them has slightly different elements to them. When TEDWomen takes place in California on 28th May, some people with apply for licenses just to stream the event live – that’s still a TEDx event – no live speakers, you just bring people together to watch the live streams. TEDxWhitehallWomen is bringing amazing speakers to share their ideas as well as streaming some of the TEDWomen event – bonus!

This year it’s quite exciting because they’ve got some amazing speakers including Jimmy Carter, Susan Sarandon, Jane Fonda and Billie Jean King, so we will stream them in as part of our event. So it brings that global conversation into your venue.

There’s lot of laws and license requirements – I’m talking multiple pages. The whole thing with TED is that you create a volunteer team because it’s completely not-for-profit because TED is not about making money – it’s about sharing ideas. So you need like-minded people to work with who will help you deliver on those license requirements. They are plentiful, but if anyone was ever interested in applying for a license I’d be more than happy to share my learning.

Traveling to Brazil for TEDGlobal – like Disney World for event folk

Because I’ve been to TEDx events I was really intrigued and inspired to go and see what the ‘Big Ted’ was all about. It was a big investment in time and money to go over to Rio. It’s the first time they’ve had it that far away – previously it’s been in Edinburgh! It was quite a difference!

TED were approached to hold TEDGlobal over in Rio. I would have gone wherever it was to be honest! I really wanted to see how the big TED brand operated. To me it was like going to Disney World for event folk. It’s slick, it’s professional, it’s inclusive. It was knowledgeable, it was inspiring, it was madness, it was thought provoking. I do think it changed part of me, because it’s not just the TED brand, it’s the whole TED community.

I was there for nine days with travel and because I’m a TEDx organiser we had workshops in advance and all kinds of sharing and learning – they really invest in us as TEDx organisers because we’re ambassadors I suppose. We’re champions of TED.

It was an amazing thing for me to arrive there in Rio and see the TED theatre built on Copacabana beach, which was just very surreal. You’ve literally got a theatre in the shadow of Sugarloaf Mountain.

TED badges are huge and bold as is everything in TED world. You know how you go to networking events and people don’t really look at the badges because you can’t see them or whatever? These were brilliant. It was like you were wearing a magnet. You were in this really bizarre community of serendipity.

We talk about six degrees of separation and I felt when I was at TEDGlobal it was like two degrees. You were surprisingly close to people who you knew. It was like-minded. There were times I was just in awe. At times it was a little bit overwhelming because it’s full on.

It’s not just the sessions. It was getting up close and personal with the speakers and the TEDFellows, who are basically the geniuses who have invented things and done all kinds of stuff. It felt like I was in an amazing world.

There’s people I’m still in contact with from that event from across the world. It’s a safe, global community that’s supportive, collaborative and creative. That’s how it felt. There were people of all ages, races and ethnicities – a real diverse mix of people. I particularly loved hanging out with Ruby Wax, who was one of the delegates. She wasn’t there speaking. She was there because she’s a massive TED fan.

It was very inspiring for me and coming back into this now, having been to TEDGlobal, my license now is a bigger license and I can do events bigger, so I can fill the Olympic stadium, but maybe we’ll do that next year!

I was really inspired. I can’t build a theatre on the beach, not this year at least! It just inspired me to think how we can do more, share more, be more creative and work to get those ideas out there because I think it’s really special. Everyone engages and everyone communicates in different ways. I almost feel like I’ve got a duty or a responsibility to get these voices out there and be part of that viral inspiration.

TED is a currency in its own right when you’re talking to people. They know TED, they get TED and they want to get involved. Everyone’s got a TED talk in them!

TEDxWhitehallWomen – what it’s all about

The global theme is momentum. We’ve broken that down into three sessions around that theme – live, think and work. It’s the momentum of how we do that and we achieve , we grow and we develop. We’ve got 15 amazing speakers from Kathy Lette, the Australian comic author to Harriet Minter, Editor of Women in Leadership at The Guardian, Sophia Cannon, who is a broadcaster and barrister, to Sue Owen who is the Permanent Secretary for the Department of Culture, Media and Sport.

If you’re inspired by TED, you’re going to be inspired by a TEDx event because you know you’ve got some amazing people who are going to really share their ideas. It’s for anyone who just wants to hear in a different way, away from the normal gender agenda, from some great women (and men) sharing their best ideas.

The audience is a real mix – from Government departments, entrepreneurs, to women in business – so there will be great networking. We’re also delighted to be working with RADA [The Royal Academy of Dramatic Art] in Business, who have kindly supported us by hosting the event at The Ambassadors Theatre, the home of Stomp.

Next projects for me

My next project is #NorthernPowerWomen, so continuing driving the campaign and also another TEDx project in the North. I will also be continuing to act as a champion for the Government’s Think, Act report. I’m working with the Department for Culture, Media and Sport and their Women’s Collaboration Network, which encourages all of the networks that fit beneath Culture, Media and Sport to work together – we host quarterly events for them. I am also Events Director for the Association of Women Travel Executives.