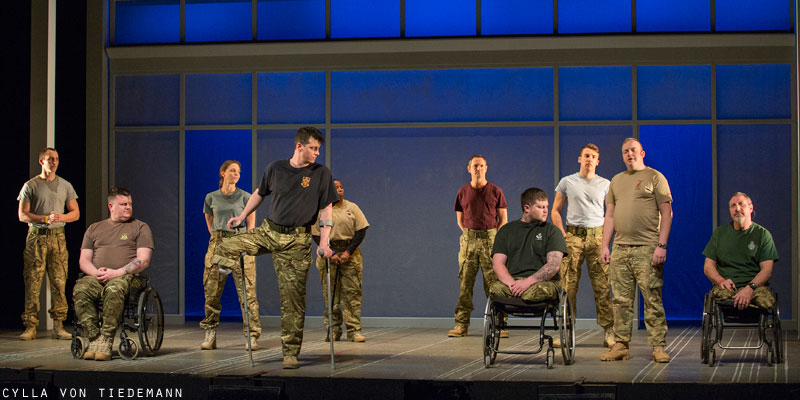 Alice Driver is a theatre producer who had an idea to create the first MOD theatre recovery for Wounded, Injured and Sick (WIS) service personnel. The project was life changing for the majority of participants and the play, The Two Worlds of Charlie F, created from the stories of the service personnel has gone on to be seen by thousands of audiences, screened on Forces TV and the Community channel, had a BBC1 documentary ‘Theatre of War’ made about it and won The Amnesty Award for Freedom of Expression 2012. Alice has supported The Australian Department of Defence in creating their own version of the model.

“…One veteran last week emailed to say after seeing the play he sat down with his wife for the first time to tell her what had happened to him when he served in Bosnia. He had never spoken about this before. This play has given a voice far beyond those of the 30 soldiers involved…”

Theatre having a positive impact

At the Theatre Royal Haymarket I specialised in working with non professionals using theatre as a tool to boost confidence, self esteem and giving individuals a voice. During this time I have worked with hospitals, hostels, young people, hospices and in business. I had seen the positive impact that theatre can have on individuals.

I was looking for a new project and met a surgeon based at Queen Elizabeth Hospital. This is the hospital where service personnel who have been injured in Afghanistan get taken back to. The surgeon introduced me to some military patients and one told me “When you become wounded, you become incredibly vulnerable, you lose yourself, your identity and fundamentally, you lose your voice.”

I realised I had found my next project; giving Wounded, Injured and Sick service personnel (WIS) a voice. I didn’t realise that, until then, the MOD had only used sports and adventure training as official recovery projects and this would be the first time using theatre.

My goal was to recruit 30 WIS and write a new play based on their experiences and for them to perform this at a West End Theatre, The Theatre Royal Haymarket. The focus was on boosting confidence, self esteem and giving a voice to the service personnel.

A new theatre company was created Bravo 22 Company in partnership with the Royal British Legion who funded the project, Theatre Royal Haymarket Masterclass Trust and the MOD. I invited a number of people to be patrons of the project; Ray Winstone, Trevor Nunn and then Chief of Defence Staff Sir David Richards.

The play, The Two Worlds of Charlie F, written by Owen Sheers and directed by Stephen Rayne, was met with critical acclaim and standing ovations.

The Two Worlds of Charlie F has now gone on two tours of the UK and to Canada. It has been seen by thousands of people, but the most important thing is the impact it has had on the service personnel. It has been life changing for them.

Marine Cassidy Little who plays the lead Charlie F says, “The problem with being blown up, other than you lose body parts, is that your life undergoes a huge change. Your confidence has gone, you’re sitting in a wheelchair, you feel disabled. Now, since doing the show I’m every bit the guy I was before I got blown up.”

Maurillia Simpson is another cast member who has found involvement with the project life-changing following the injury that ended her career, “I thought I had lost everything, felt I’d been a failure. I was unsure about my future, and when Alice came with Ray Winstone asking if there were any soldiers who wanted to be involved – I just wanted to be part of it.”

“It’s given me an adopted family – I have brothers, and not just brothers in arms. I have friends made in a different sort of battle. We’re all dealing with our injuries, our bad days, good days and not-so-good days. It’s given me a sense of belonging to a team again, something I thought I’d lost when I lost my dream.”

Ray Winstone, who was a project ambassador, said, “I am so proud and overwhelmed. It is the most moving play I’ve seen for a long, long time.”

What I never anticipated was the impact on the audiences. I have had many emails from audiences who have said it has had a great influence on them whether as a civilian or a member of the military or their family.

One veteran last week emailed to say after seeing the play he sat down with his wife for the first time to tell her what had happened to him when he served in Bosnia. He had never spoken about this before. This play has given a voice far beyond those of the 30 soldiers involved.

The BBC documentary about the making of the play, Theatre of War, gives a great insight into the project, filmed by Chris Terrill and available to buy on Amazon. It was commissioned by Alan Yentob and opened his BBC1 Imagine series last year.

So many people have made this possible and I am incredibly grateful to every single one of them for making this happen.