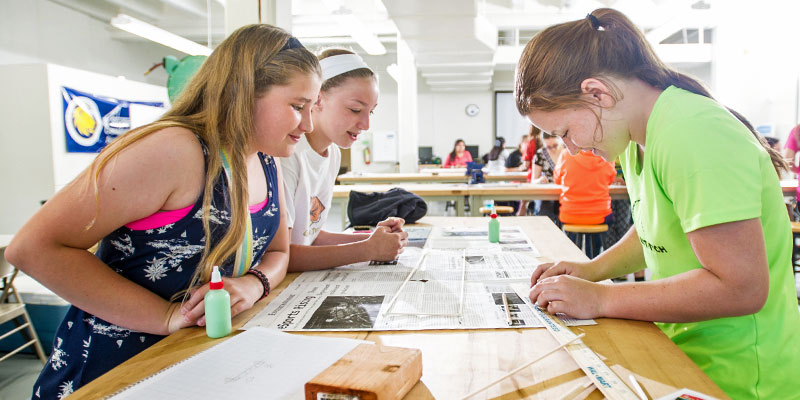 Abbie Hutty is a Senior Spacecraft Structures Engineer at Airbus Defence and Space in Stevenage, where she is currently working on the ExoMars Rover mission; Europe’s first rover mission to Mars. She holds a Master’s degree in Mechanical Engineering from the University of Surrey, where she graduated first in her class. Abbie co-ordinates a team of specialists to achieve a rover structure that will survive the rigors of a rocket launch, descent through the atmosphere of the Red Planet, and landing on the surface, followed by an operational lifetime in the punishing Martian environment.

“…Doing outreach in the middle of a busy week really reminds me why I do the job. When I’m having a full-on week and it seems like I can’t see the woods for the trees, to take a step back and tell a bunch of kids that I’m building a Mars Rover, and what it is going to do, and the scientific impact it could have, really lets you take stock and appreciate again why you do it!..”

Abbie, you’re a great friend of Womanthology and we’ve chatted to you several times about your career to date and the work you do, so we were interested in learning more about your work as a STEM ambassador. How did this start?

I have to admit I had an ulterior motive! When I was at university, I have to say my biggest weakness was public speaking. My Master’s defence was a clammy-palmed, voice-shaky, hand-trembling nightmare!

Going into the world of work I knew the day would come when I would have to defend my technical work to panels of peers and industry experts – and so I knew I had to improve my presentation skills to avoid massive embarrassment.

I naively thought that talking to kids would be a good way of developing those skills and that confidence “while I wasn’t being asked probing, challenging questions”. How wrong I was! Kids ask by far more complicated questions than my peers do, just because they’re so unconstrained and have so much more imagination! My peers ask how I did this analysis, or why I made that design decision. Kids ask how big the sun is in centimetres, where the alien hospital is, or my personal favourite “Where will the Earth go when the sun stops?”

How does it fit in with your day-to-day role?

I have an agreement with my line manager that I can support up to one day’s worth of outreach a month, during “core office hours”, plus obviously as much as I want outside of office hours! I sometimes have to work some pretty late nights to make up the time and make sure all my project responsibilities are met and my team all know what they are meant to be doing if I do take the time out – but I think that’s a worthwhile price for me.

Doing outreach in the middle of a busy week really reminds me why I do the job. When I’m having a full-on week and it seems like I can’t see the woods for the trees, to take a step back and tell a bunch of kids that I’m building a Mars Rover, and what it is going to do, and the scientific impact it could have, really lets you take stock and appreciate again why you do it! I obviously get a lot more requests to support events than I am able to, but we have a team of ambassadors at Airbus, so sometimes if I can’t personally support things my colleagues can.

The biggest difficulty is that schools events on the whole happen during the school day – which is also the core office hours and when my most important meetings and reviews are taking place!

What other organisations do you work with?

Airbus work to deliver their outreach through the STEM Ambassador programme, which is a national initiative with local coordinators for different regions. We also get approached directly a lot, as teachers and schools we have previously run events with often come back and ask for similar during the next academic year. We are quite well known locally, so we get requests just on the basis of our local profile in the community, or we get seen in the press and media and people just find us on our website and request events!

Outside of the STEM network there are loads of other groups who try to promote STEM, and more particularly engineering, who I work with. I’ve been a mentor for scholars through the Arkwright Scholarships Trust for a few years now, which is a scholarship awarded to AS level students who are aiming towards a career in engineering. That normally involves advising students on university applications and choices, hosting work experience and so on.

I’ve been a mentor for the Engineering Education Scheme several times too, which is a project run over a few months where AS level students partner with an engineering company to complete a real-world engineering challenge. That’s a fun one as the students really get stuck in and get to design and build something real, and get a proper experience of what it is like to be an engineer.

I’m an Ambassador for the QEPrize, which involves some outreach, and online videos and materials for schools and students to understand what engineering is. I’ve done profiles and events for the Women’s Engineering Society, the Institution of Engineering and Technology, and the Institution of Mechanical Engineers. I’ve appeared in videos and web content for the government’s YourLife initiative, and BBC’s micro:bit – basically there are loads of groups all doing brilliant work and I try to get involved with anyone who asks me to support!

What’s it like dealing with the media and being a role model?

Having been the shy, quiet girl at school, and struggling with public speaking at university, I think I’m one of the most unlikely media spokespersons going! Having done a lot of schools events I got asked to do local radio interviews, and then local TV, and it just kind of grew from there. I still find it quite nerve-wracking, especially live TV, and I hate watching myself back as I always find it massively cringey to see what I look like and sound like. It’s like hearing a recording of yourself- you always sound different to how you think you do in your head!

How does having a presence on social media help?

I keep a Twitter account and I have a LinkedIn profile, but that’s pretty much it for me! I only use LinkedIn to connect with and stay in contact with people I’ve actually worked with, as that’s how I think it is the most valuable.

Twitter gets more or less attention depending on how hectic my life is at the time! I do use Twitter for professional news and networking, finding cool engineering advances and interesting developments on there by following other engineers and companies – I always learn news first on Twitter! I particular love watching people live-tweeting about tests, launches, or other exciting space industry developments.

When Rosetta [a European Space Agency probe] was landing Philae [a robotic spacecraft] on the comet the news was on Twitter long before it hit the news sites! Twitter is great for hearing about events and initiatives too – things that I can help publicise around my networks for people to read, attend, or get involved with. I also follow a lot of cool women engineers I know on Twitter – it’s nice to have a network of people I’ve met and interacted with around the world, and to keep up-to-date with their news and careers.

I do sometimes get approached on Twitter by different groups to see if I’ll work with them or do events with them. Some have led to fruitful collaborations, or fun events, so I try to check in every now and then just in case there are any exciting opportunities!

You get what you give … and much more

Despite putting a lot of my personal time into STEM outreach I can happily say that I’ve gained a huge amount more from building my confidence and networks. It’s a true definition of reciprocity, so if you’re an engineer and you haven’t done any for a while, it’s almost National Women in Engineering Day, so what are you waiting for..?