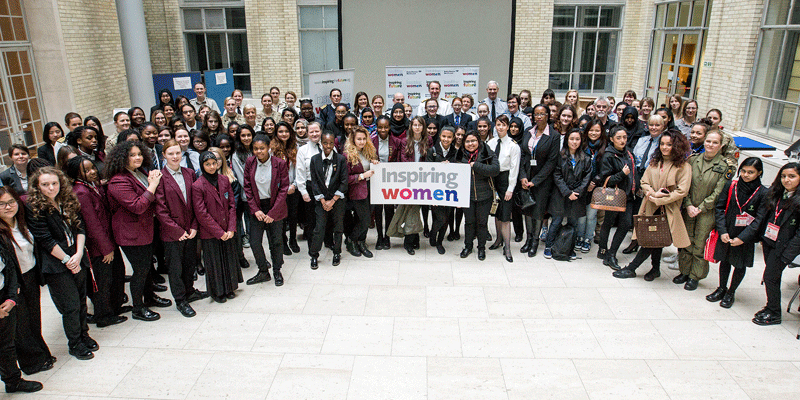 Air Vice-Marshal Elaine West CBE is a senior Royal Air Force officer. Until recently she was the most senior female officer in the British Armed Forces, the first to hold a non-honorary air vice marshal or equivalent rank since the Second World War, and the first to achieve that rank in the regular forces. Elaine was the Director of project and programme, Defence Infrastructure Organisation, Ministry of Defence and is a trustee of the charity that runs the Inspiring Women campaign, Education and Employers.

“…If you can give one hour of your time in 2017 to visit a school near where you work or live to share your experiences, so you’ll be helping to inspire the next generation of women to be confident in themselves and to dream big…”

Elaine, please can you tell us about your career to date and what made you want to join the Royal Air Force?

I joined the RAF straight from school. In the early years, my specialisation was HR, but latterly my roles have included the programming, procurement and delivery of operational infrastructure. My final role prior to retirement this year included the provision of infrastructure to defence capability platforms, including the Navy’s new carriers, ships and submarines, together with the RAFs new strike fighter F-35.

What does your role in the military involve on a day to day basis?

Meetings, meetings and more meetings! Many would be in Ministry of Defence in Whitehall, but others would be on-site. Travelling to sites across the country and meeting up with industry partners, specialist teams and my own staff brought my responsibilities to life.

Please can you tell us more about Inspiring Women and how you got involved?

I heard about Inspiring Women and was immediately hooked! Giving up one hour to inspire the next generation of girls is so simple, yet so effective. The results are amazing!

What sort of activities have been run recently and how can Womanthology readers get involved moving forward?

The Inspiring Women Campaign has had another hugely successful year in 2016. As well as hosting continuous events throughout the year, from small school visits, to events at the London Stock Exchange, to the recent launch of the campaign on a national scale in China, every volunteer interaction is invaluable to helping young women look past gender stereotypes and aim high.

The best way to get involved is to get signed up. All that is asked for is one hour, once a year, to talk to school age girls about your career path and experiences along the way.

There’s a big trend towards reverse mentoring at the moment. What can the volunteers learn from the pupils they interact with?

Talking to young people gives you a completely different perspective. Making a contribution is both rewarding and inspirational in equal measure. I’d urge everyone, no matter what their job, to sign up. You’ll learn heaps about yourself and the next generation … and all within a couple of hours!

What is the best advice you were given as a woman in a male dominated career when you joined the Royal Air Force?

Be yourself, don’t change for anyone … male or female.

How are the British Armed Forces changing to accommodate women and other minorities?

There’s been amazing progress in the last ten years with the RAF leading the way. As well as focusing on minority recruitment, we’re working equally hard on retention. The range of careers and opportunities open to women are wide ranging with exactly the same career training, development and prospects as our male colleagues. We have women doing amazing things every hour of every day somewhere in the world, such is their contribution to defence.

What is coming up next for you and Inspiring Women?

The campaign is continuing to grow thanks to the dedication of our volunteers and the rewarding experiences that accompany being a volunteer. For 2017 we hope to continue reaching out to girls on both a local and international scale.

Campaigns such as Inspiring Women are helping to ensure significant progress is being made however there is still much to be done. If you can give one hour of your time in 2017 to visit a school near where you work or live to share your experiences, so you’ll be helping to inspire the next generation of women to be confident in themselves and to dream big. You can can join over 22,000 women who have already pledged to give an hour a year by signing up at http://www.inspiringwomencampaign.org/.

To celebrate International Women’s day 2017, women and men are coming together to #BeBoldForChange and help forge a better working world  – a more gender inclusive world. What better way to do this than inspire young people in schools?