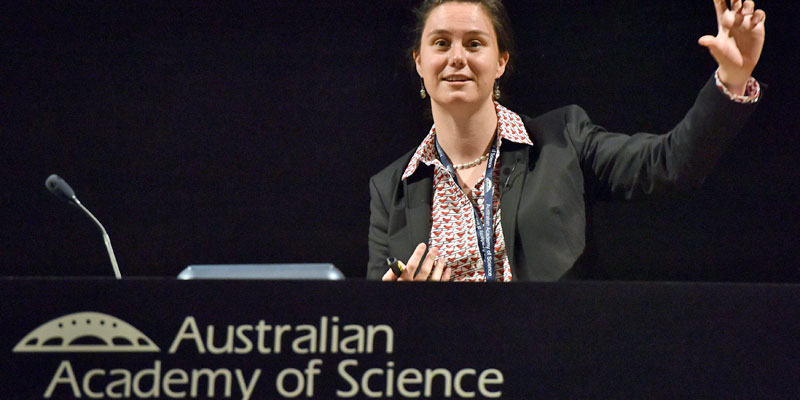 Dr. Helen Maynard-Casely is an instrument scientist for the WOMBAT high-intensity powder diffractometer at the Australian Centre for Neutron Scattering, which is part of the Australian Nuclear Science and Technology Organisation’s (ANSTO) site outside Sydney. She assists and collaborates with visiting scientists, works with the sample environment team in commissioning new equipment for WOMBAT and is co-responsible for improving and expanding the capabilities of the instrument. Her expertise is in the study of small molecules and ices under pressure and much of this work is motivated by the wish to understand the interiors of planetary bodies.

“…I like to take some time and think about the women have influenced me and helped me to the point I’ve got to. Events recently have made me realise that it’s more important than ever. I’ve been so concerned how quickly ideas that I find outdated about women’s role in society have slipped back into being the norm…”

One small step for woman, one giant leap for Helen

When I was seven, Helen Sharman became the first Brit to travel to space, and that had a massive impact on me. Family legend is that I walked up to my dad and said to him: “I’m going to space, because that’s what Helens do!” Looking back, I’ve realised that it wasn’t so much the wanting to go to space, but the realisation that I could do anything.

Ten years later, and though the dream of being an astronaut had subsided a bit, but I really wanted to be a scientist and “do space stuff”. So, in seeing a Planetary Science course listed at University College London, I had found my dream course, and it didn’t disappoint.

By the time that was coming to the end I had realised that to work in science I needed a ‘trade’. One of the Ph.D. students had given me the opportunity to help them on an experiment at the ISIS neutron source in Oxfordshire, a central science facility – as soon as I walked in I was hooked!

The place was amazing; gangplanks, compressor noises and the opportunity to collect data that really did discover brand new things. My science ever since has revolved around using these central facilities to explore the materials that make up the planetary surfaces we observe. Neutron sources and synchrotrons are perfect for studying samples under planetary conditions, but of course they are useful to massive range of science disciplines too. 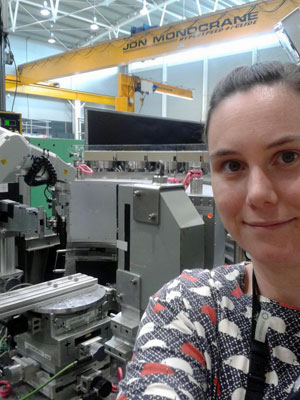 Now I work at the Australian neutron source, and am co-responsible for an instrument at a central facility that is used by researchers from Australia and overseas. It’s really varied, that’s why I like the job. If I’m working supporting another researcher’s experiment then I will be at the instrument first setting up and calibrating it, then talking to the visiting scientists about their aims and advising them on what we can do.

Sometimes I get to drive my own experiments, and that’s always fun but even more exhausting as I tend to try and push the boundaries of what the instrument can do.

My passion for science communication

One of the things that drives me that look on someone’s face when you show them something that you’ve discovered. Plus, it’s always fun to tell them the ups and downs of getting to that point. Also, for me, it is about accountability – ultimately, I’m funded by the tax payers and it’s important to involve them and show what can be done by myself and others and how it can benefit everyone.

Fixing the perception that science isn’t for women

There’s so much that can be done! I’ve been really happy to see movement on a high-level here in Australia, with the Science and Gender Equity (SAGE) pilot – an Australian version of the UK’s Athena SWAN awards. This will have a big impact, and I like the model that it makes each institution look at their own particular challenges.

I was really happy to see ANSTO sign up – and as a government research organisation we have very different issues to a university – but through SAGE we can all improve. Also, I think there’s an important role for the professional societies in this – those that award and recognise scientific contributions.

I’m part of the Australian Institute of Physics, and we’ve recently realised how few times a woman has been recognised through the society’s awards for their contributions to the field, despite all of us being able to name many people who would deserve them. It’s realising where a small bit of reflection can help many in the future.

Science is not about being stuck in a lab all day

For me, one of the attractions of a scientific career was the possibilities that it gave me seek new ideas. I think people forget that science is a fundamentally human endeavour, and it requires human interactions, so you need to bust out your lab and go speak to others! Otherwise we get stuck in a rut of our own ideas.

I’ll actually be at one of the other big labs here in Australia (the Australian Synchrotron) collecting data will some colleagues from NASA. The experiment is looking at possible minerals that could freeze out of an ocean in Jupiter’s moon, Europa, (hopefully we might find some new ones!).

On International Women’s Day I like to take some time and think about the women have influenced me and helped me to the point I’ve got to. Events recently have made me realise that it’s more important than ever. I’ve been so concerned how quickly ideas that I find outdated about women’s role in society have slipped back into being the norm. Everyone has a right to participate, and we need to support those who have trouble raising their voices.

We need to break the culture that you can only be a scientist if you prioritise work above everything. Working ridiculous hours and holding back on life really does only keep the status quo, and cuts many people out of science as a career.

Coming up next for me and ANSTO

Things are getting really exciting, there’s a real growth and energy about planetary science in Australia, it is exciting to be a part of. Planetary materials is now seen as a strategic part of the research that ANSTO does, mainly because not only does it put out some awesome results (we’ve found four new materials in the last three years!) but it develops the capacity of our instruments here, so it benefits everyone.