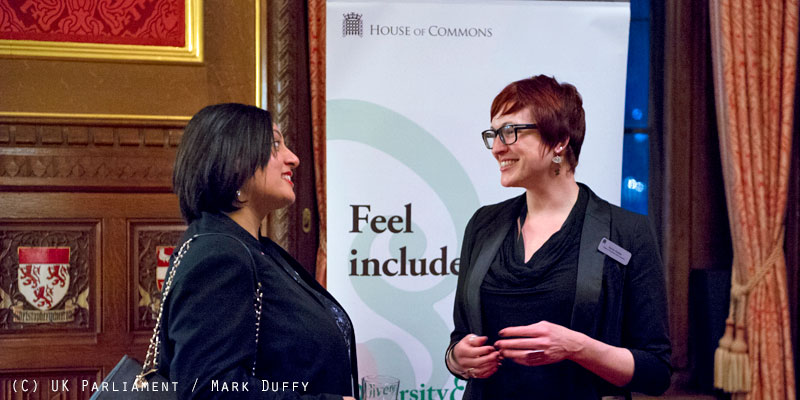 Anne Foster is Head of Diversity and Inclusion at the House of Commons. She working alongside parliamentary stakeholders to provide a positive, inclusive working environment where people are valued for the skills and experience that they bring to work, and provide advice on improving accessibility for visitors and the public.

“…Many women work in traditionally male-dominated environments, but at Parliament this is underlined by the history that surrounds us: portraits, paintings and statues are dominated by white men. These are people who have made significant contributions to Parliament, but there are untold stories from others. This is why it’s even more important to ensure everyone is visible and has a voice…”

Passionate about diversity and inclusion

I joined the House of Commons in 2001, having completed my Masters in the United States Studies but without the money to travel there. I saw an advert in the Metro newspaper for a senior office clerk and thought I’d apply, but didn’t think it would amount to anything. But I got the job, and nine months later when I was eligible to apply for internal roles, I successfully applied to be an HR Policy Officer, which was the start of a succession of HR roles and qualifications.

These jobs included working with the trade unions, and a senior HR manager role with responsibility for diversity. That was the job I was most passionate about, and three years later I applied for my current role as Head of Diversity and Inclusion. The time has passed very quickly – it’s always interesting, and I have made very good friends. That is one of the reasons, I think, why people tend to stay at the House for a long time – wonderful people who will go out of their way to help each other.

The other reason is that we are supporting the democratic process in a number of ways, including supporting MPs in carrying out their parliamentary duties and engaging people across the country to inform them of the work of parliament and encourage everyone to get involved.

One of the elements I love most about my job is the variety. It involves a mixture of meeting people, researching and writing papers, managing and leading a team, and providing advice and guidance. All of it is focused on considering how we can do things differently to make Parliament more inclusive and accessible.

For example, yesterday started with writing a paper with my counterpart in the House of Lords on how we can support each other’s diversity and inclusion strategies. Next, a meeting with my deputy to discuss plans for a recruitment open day.

Afterwards, I ran a mock interview for a brilliant colleague who stands an excellent chance of being successfully promoted. (I hope she will be gracing the pages of Womanthology in the future!) before meeting the talent manager to develop a session on diversity and inclusion for a new pilot talent programme.

The day ended with a corridor conversation with an MP about a new initiative we’re trialling, and a meeting to discuss a survey of Sikhs in the UK and how employers should be recognising Sikhism as an ethnicity as well as a religion.

My team and I work with a range of stakeholders, both internally in Parliament, and externally with the public, other diversity and inclusion practitioners / employers, and people applying for our outreach schemes. We are lucky that the Speaker of the House of Commons, the Right Honourable John Bercow MP, is a passionate supporter of equality, diversity and inclusion, so we work closely with him. Our management board is also very supportive, making diversity and inclusion a priority area for the organisation.

Diversity and inclusion: More than a ‘nice-to-have-if-we-have-time’ concept

Some people mistakenly think that diversity and inclusion are the pink and fluffy, ‘nice-to-have-if-we-get-time’ concepts. But consideration of people’s lived experience and the impact that people and processes can have on us, at work and elsewhere, are essential for the effectiveness of any employer, organisation or forum.

Stonewall, the LGBT charity, says: “People perform better when they can be themselves.” Who is going to argue with that? It doesn’t have to be big ticket items such as targets to address the under-representation of women in senior roles. Small acts of everyday inclusion make a big difference, and create a positive ripple effect.

The mistake I made when I started in this role was to spend a lot of time trying to convince people who don’t think there is value in the work we do. Challenging misconceptions is more effective when you work with other people who want to make a difference. They spread messages and you reach more people. Inclusivity is about everyone.

Having said that, the House of Commons Service aspires to reflect the people we serve, so reaching out to a more diverse group of people is important to us.

Challenges of working in a traditionally male-dominated political environment

Many women work in traditionally male-dominated environments, but at Parliament this is underlined by the history that surrounds us: portraits, paintings and statues are dominated by white men. These are people who have made significant contributions to Parliament, but there are untold stories from others. This is why it’s even more important to ensure everyone is visible and has a voice.

Our Parliamentary Role Models campaign is one way that we’re trying to tell the stories of diverse people in Parliament who have inspired those around them. The Vote 100 project, marking the centenary of the Representation of the People Act 1918, is another, documenting female MPs and other women of significance to Parliament’s history. Mary Branson’s light sculpture, New Dawn, celebrates women’s suffrage and is a visible symbol of how women’s contributions are being recognised.

One of the achievements I am most proud of is the development of our parliamentary workplace equality networks. They are bottom-up and demand-led, and have been an effective way of joining up different groups on the estate. They have achieved more than my team and I could have done on our own. They work because of the passion and commitment of stakeholders across Parliament who volunteer their time. Together, we are working to positively change the culture.