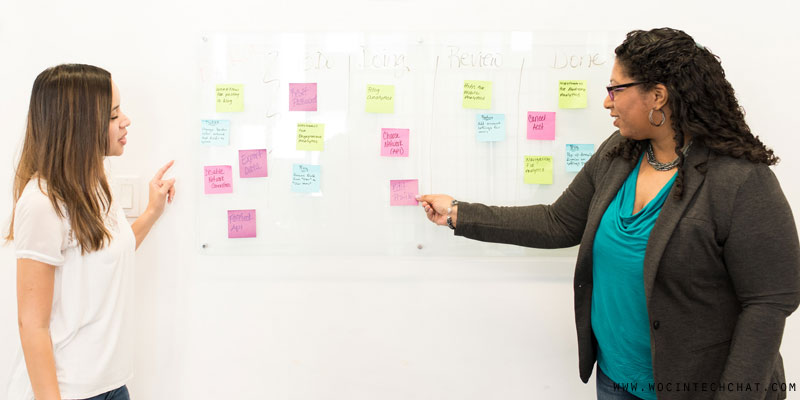 Sara-Jane Dunn is a scientist at Microsoft Research, having studied maths followed by computational biology at the University of Oxford. She joined Microsoft in 2012, spending her first two years as a postdoctoral researcher. Alongside her current position, she is an Affiliate Researcher of the Wellcome Trust Medical Research Council Stem Cell Institute. Sara-Jane is a specialist in mathematical modelling and computational biology.

“…If you’re the only women in the room, or the meeting – which is often the case – it can be hard being the one that ‘sticks out’ for this reason. I might feel like less of an imposter if there were more people in the room ‘like me’…”

I just wanted to do maths

In school, maths was always my favourite subject. I remember finding it difficult during ‘career’ sessions to name the job that I wanted to do when I grew up – being a (medical) doctor or a lawyer didn’t appeal, nor anything else vocational. I just wanted to do maths.

So fast forward a couple of years and I won a place at Oxford to study maths, followed by a DPhil (Ph.D.). By this point, I’d become very interested in the application of mathematics to biology – having been introduced to this sector by Philip Maini, an excellent lecturer during my undergraduate course.

When the opportunity arose to complete my Ph.D. at a Doctoral Training Centre focusing on the application of the physical sciences to the life sciences, I jumped at the chance. Once I’d completed my DPhil I still just wanted to keep going with research, and this led me to a postdoctoral, and eventually a permanent research role, at Microsoft Research. The research being carried out here was a perfect fit for me.

What my role involves

Day-to-day I carry out active research, and because of my specialism, interact with experimental collaborators. So it can vary quite a lot from trying to make sense of some biological data, to working through the theory of the modelling approaches we employ / devise, to encoding these models computationally. I also get the opportunity to speak about my work at various events and conferences, which allow me to interact with the wider research community and get new ideas about what to work on.

Being the only woman in the room

If you’re the only women in the room, or the meeting – which is often the case – it can be hard being the one that ‘sticks out’ for this reason. I might feel like less of an imposter if there were more people in the room ‘like me’, if that makes sense?

In these situations it’s important to remember not to project your fears onto other people who probably aren’t thinking what you’re paranoid about! That said, occasionally I’ve had interactions that have left me wondering whether they would have happened in the same way if I had been a guy. All in all though, I don’t have cause to complain – I work with great colleagues and collaborators.

Hosting a Women in Mathematics event for the London Mathematical Society

The day was aimed at women in mathematics in a range of roles, from undergraduate through to early postgraduate, and those further on in their career. The meeting aimed to demonstrate that there are a wealth of interesting careers for mathematicians in academia and industry, that there is a need for well-qualified mathematicians, and that there are women working in these positions. Hopefully it was an event to inspire and encourage.

Microsoft supports a number of events to encourage young people, and women, into careers in STEM subjects. I have been involved in some of these myself, and they are typically very engaging, hands-on events, that demonstrate the breadth of topics and innovations that can emerge out of skills in STEM subjects.

Recently, as part of International Women’s Day, Microsoft launched the #MakeWhatsNext campaign to raise awareness of the STEM gender gap and inspire women around the world to take action by getting involved in computer science education, while celebrating women inventor’s accomplishments around the world.

Between International Women’s Day in early March and the first week in May, Microsoft has been driving more than 43 events in 27 countries across the region to inform and inspire more than 6,700 young women about the potential of STEM studies and a career path in technology.

Advice for girls who are interested in maths related careers

I would encourage girls who are interested in maths to speak to as many people as possible – not just women – who are in maths related careers, so as to get a better handle on what different positions exist, and are like in practice.

You may find you can combine other passions with mathematics. No two jobs will be the same. Events like the Women in Mathematics day are perfect for this. If you are able to find a mentor, do so, as they are invaluable. While it might sound trite, I’d say to follow your nose, and keep pushing on the doors that you find interesting.

Next for me and Microsoft

I’m currently in the middle of an exciting project with collaborators at the Universities of Cambridge and Padua, which focuses on the behaviour of stem cells. We’re keen to get this work published soon. As for Microsoft, there are a whole host of things on the cards, from artificial intelligence, to healthcare, to gaming, to Hololens… It’s an exciting time for the company.