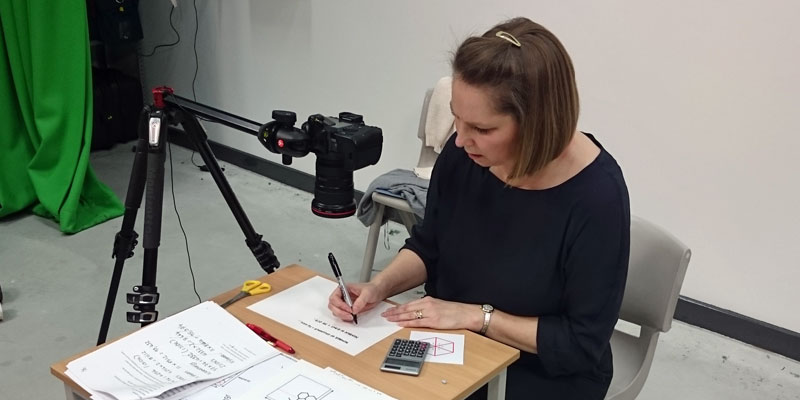 Noel-Ann Bradshaw is a tutor on a project called Citizen Maths that aims to improve use of maths in the workplace. Noel-Ann worked as a pre-school numeracy specialist before getting a 1st class degree in mathematics as a mature student at the University of Greenwich. She now teaches mathematics and operational research at Greenwich in the Faculty of Architecture, Computing and Humanities and is also active in mathematics support, particularly for students studying non-science subjects.

“…It is easy to think that if you are ‘stuck’ on a question then you can’t do it, but in reality most mathematicians are stuck on a maths problem – anyone doing mathematical research is struggling to prove a theorem or work out how to solve the next piece of a mathematical jigsaw. Eventually breakthrough comes, but this may take a long time…”

Making a return to maths

I wanted to apply to read maths at university when I was studying for my A-levels but my school advised me against it as I was only doing single maths. As a result I lost confidence, became demotivated and ended up studying catering management instead. Many years later I became interested in maths as I helped my children with their maths homework (GCSE). I was working as a numeracy specialist in a pre-school and then went to train as a numeracy teacher for adult learners.

Whist I was doing this training I was advised to apply for a maths degree. I took an entrance test at the University of Greenwich (as I had a poor A-level grade) and they accepted me – I had to put in a lot of revision of A-level material before taking the test and I found I really enjoyed this. However, I still did not think I would do well on the degree programme as I still had very low confidence in my mathematics ability.

Filling all the gaps and graduating with a first class degree

Being a mature student what I lacked in knowledge I made up in motivation so I filled in all the gaps I had and I ended up graduating with a first class degree. I was invited to stay on and undertake a Ph.D. in Evolutionary Algorithms for Financial Applications.

Following this I became a lecturer in the mathematical sciences department and I am a member of the Faculty Management Team. I am involved in various activities outside the university; this includes being an external examiner at other universities, a member of the Operational Research in Schools group and vice president of the Institute of Mathematics and its Applications, as well as a tutor on the Citizen Maths course. None of these would have been possible had I not had the opportunity to go back to studying.

Our consortium (led by Calderdale College in Halifax, with the UCL Institute of Education and the awarding organisation, OCR) was successful in securing funding for the development of Citizen Maths from the Ufi Charitable Trust.

We’ve modelled Citizen Maths in part on the 2011 artificial intelligence (AI) massive open online course (MOOC) designed and run by Google’s Director of Research, Peter Norvig, and Stanford University’s Sebastian Thrun. (Thrun went on to found the online education company, Udacity.) Our aim is to give learners the feeling that they are in a one-to-one tutorial with an effective maths teacher.

So Citizen Maths is made of very short instructional videos by me and our other ‘to-camera’ tutor, Paula Philpott, who has also had a lot experience as a maths teacher, in her case in further education. In addition to the instructional videos, we provide activities to help learners build up their mathematical understanding, including a small amount of programming, using an educational programming language called Scratch.

A starting point for the design of Citizen Maths is that learners will benefit from engaging with a different approach to the teaching and learning of mathematics from the conventional pedagogy that did not work for them in the past. Our design sets out to avoid portraying maths as something abstract. Instead it puts maths in the context of many adults’ everyday lives. For example each course idea is shown in action in several different contexts. For example, “uncertainty” involves the following situations:

Citizen Maths is a free open online course for self-motivated adults who want to improve their grasp of maths at Level 2, which is the level that 16 year old school leavers are expected to achieve (about 60% do so). The group is important because it is drawn from a huge cohort (perhaps 10 million people in the UK) who though they are numerate, are not really confident users of maths in everyday life and work.

When introduced to someone as a mathematician I often hear the phrase: “I am no good at maths,” which is often followed by tales of bad school experiences. I think confidence is key to doing well in maths.

A lot of school mathematics has focused on getting the right answer so school children have thought that they are no good if they do not get the right answer rather than focusing on understanding how to do the problem and the different methods that can be used.

It is easy to think that if you are ‘stuck’ on a question then you can’t do it, but in reality most mathematicians are stuck on a maths problem – anyone doing mathematical research is struggling to prove a theorem or work out how to solve the next piece of a mathematical jigsaw. Eventually breakthrough comes, but this may take a long time. Sometimes this never comes – there are lots of unsolved mathematical problems out there.

It is not wrong to be stuck on a maths problem – what is important is what you do when you are stuck. I am keen to encourage students to try different ways to look at maths problems and different techniques to try and solve problems. It can also help to put the problem that you are stuck on away for a few hours. Students find that if they look at it again after a good night’s sleep or after a couple of days they are now able to solve it.

We’ve got very nearly a 50/50 split, with women just in a majority. So far there’s no discernible gender difference in the uptake between different modules.

Online learning gives people who have the necessary IT fluency (there’s no need for anything at all out of the ordinary) the opportunity to study at their own behest, for free, at a time a place to suit themselves, without needing to attend a physical place at fixed times and dates.

For those who’ve got to grips with the course, it has been positive, with some people very enthusiastic about the approach we have been taking. If there’s a drawback it’s that on the face of it Citizen Maths could be perceived as some kind of “miracle fix”, when there’s no such thing in the world of learning, because learning new stuff takes effort, as I indicated earlier.

Coming up next for Citizen Maths

We are just about to go live with new content for Citizen Maths that covers two more ideas in maths – measuring, and pattern. That brings the total covered to five. We are implementing a new interface to the course, which will give learners a very clear picture of the progress they’ve so far made, and what they’ve still got left to do.

We’ll be evaluation this new version of Citizen Maths in the coming months, making some further changes. Our intention is that by the end of this year Citizen Maths will exist as a free service that anyone anywhere can use.