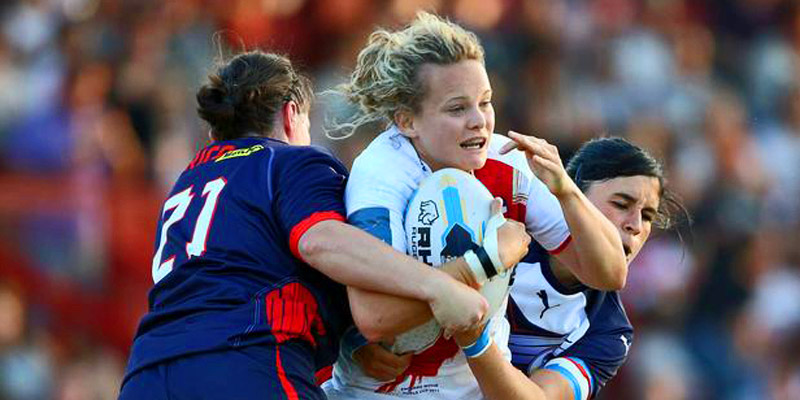 Lois Forsell is Women & Girls Development Officer at the Leeds Rhinos Foundation, and her role is to increase the interest and participation of female Rugby League in Leeds in primary schools, high schools and community clubs. She does this by delivering sessions to high schools and linking closely with community clubs to support them by increasing the amount of players at their club. She also takes leads training sessions and co-ordinates high schools boys and girls competitions in Leeds throughout the year, making sure all schools get lots of competitive participation opportunities.

Ahead of International Women’s Day, on 16th February 2016 is was announced that national law firm Stowe Family Law have pledged their backing for women in sport by supporting the Leeds Rhinos Foundation in their delivery of Rugby League to schools and clubs across the city. Lois leads the promotion of Rugby League to girls and women and will be supported by Marilyn Stowe, Stowe Family Law’s Senior Partner to raise the aspirations of girls the Foundation works with.

I studied Sport Development at Leeds Metropolitan University [now Leeds Beckett University], after graduating I took an internship at Leeds City Council which led to coaching and networking opportunities. Soon after starting my internship I took a job with Hunslet Hawks RLFC as a Rugby League Development Officer. In this role I was working with primary schools in South Leeds and was in the role for a year. A really exciting opportunity came up to join the Leeds Rhinos Foundation as the Women & Girls Development Officer, a job that I had been interested in since I went into further education.

Working at Hunslet Hawks gave me a great start to my career in sports development but working for my home town Super League club and being able to dedicate my time to female Rugby League was a really exciting opportunity and challenge.

Day to day I work in a number of different Leeds high schools coaching girls in their P.E. lessons, during dinner time or after school. Throughout the year I run girls competitions for the Leeds high schools and primary schools such as touch rugby, tag rugby but mostly contact Rugby League. I also link in with the girls’ community clubs, inviting the girls I work with in the schools to join their local team and play regular Rugby League.

The best part of my role is seeing the girls that I have coached in school playing for their school teams in the competitions I run or even better at their local community club. I really enjoy the challenge of changing the girls’ perceptions and attitudes towards Rugby League as a lot of the time they have a negative image of the sport before actually experiencing it.

The partnership with Stowe Family Law was made between Ewan Metcalf, the Business Development Executive at Leeds Rhinos Foundation, and Marilyn Stowe. Ewan and Marilyn were chatting about how Stowe Family Law could link with the Foundation and after discovering how much support Marilyn lends to women in business it was agreed it would be great to have her support for the Women & Girls Programme.

After meeting Marilyn for the launch of the partnership between Leeds Rhinos Foundation and Stowe Family Law we discussed how we could link further. The best thing I thought after meeting Marilyn was how supportive she is of women over all, whether that be in business or sport, and how much she valued importance of women achieving their full potential in any environment, but in particular those that are sometimes more challenging.

I will be inviting Marilyn along to some of our competitions and asking for her to present the trophies at the finals. Marilyn has also offered her time to speak to the girls about business and share her story, which will be an amazing opportunity for the girls I work with.

It is massively important to develop opportunities for women and girls to play Rugby League. A lot of people may see Rugby League as just an opportunity for someone to play sport on a weekend however for me, it has been a lot more than that and I believe it could be for others. Rugby League has given me confidence, the opportunity to be part of a team, the chance to excel at something I love and a career that I really enjoy.

The opportunity makes them feel equal to their male counterparts who have always been offered sports such as football and Rugby League in P.E., whereas the girls traditionally play netball and do gymnastic for example. I would say be open-minded and see it as an exciting opportunity to try something new. Some may be more interested and suited to full contact Rugby League, however there are other alternatives which are great too, such as touch and tag Rugby League.

Coming up for me and the Foundation

I am in currently in pre-season training for the 2016 season which I can’t wait to start. The Women’s Rugby League World Cup is in 2017 and I am training hard hoping to secure a position in that squad. With regards to my role at the Foundation I am going to keep enjoying it and working with the Leeds Schools and Ambassador Clubs to support them as much as I can to see growth and developments in the female game.