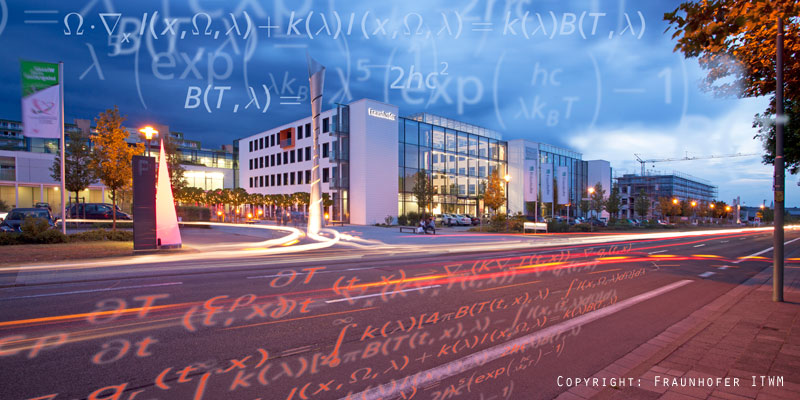 Dr. Almut Eisenträger is a research fellow in applied mathematics at the Fraunhofer ITWM [the Fraunhofer Institute for Industrial Mathematics]. Prior to this she has worked and studied at the University of Oxford. Almut’s specialisms are in numerical analysis, simulations and mathematical modelling.

Almut – please can you tell us about your career to date and what got you interested in pursuing a career in maths?

I have never had a big life plan, but each step led to new exciting opportunities. I always enjoyed maths at school and hence went for an undergraduate degree in maths, with computer science and mechanical engineering as minor subjects. Despite a rather applied focus of the degree, I specialised in functional analysis, a very theoretical part of maths. During a visiting year at Oxford, one of the professors there planted the idea of research as a potential career in my head.

The difference in academic schedules between Oxford and my home university gave me the time for a three month internship, which I did at the Fraunhofer ITWM. The project I worked on there steered my interest fully back to applied mathematics, so I continued with that for my final undergraduate thesis and applied for a Ph.D. place (or DPhil as it is known there) in numerical analysis at Oxford.

My project there was somewhat at the intersection of numerical analysis, engineering and medicine, working on a model that was initially developed for soil mechanics to simulate flow of cerebrospinal fluid through brain tissue in healthy and diseased people.

After the DPhil, I switched groups within the Mathematical Institute at Oxford and joined the Oxford Centre for Collaborative Applied Mathematics (OCCAM) as a postdoc [postdoctoral researcher], trying to improve our understanding of how small magnetic particles behave and interact in a flow if they’re inside a magnetic field; the end goal here being better ways of removing toxic heavy metal particles from waste water.

Remembering the Fraunhofer ITWM from my internship, this was a natural place to apply for my next job, once my Oxford project came to an end a year ago.

Please can you tell us more about Fraunhofer ITWM and what your role involves on a day to day basis?

The Fraunhofer ITWM is one of (to date ) 67 Fraunhofer Institutes on different subjects, all with the aim of doing applied research and making the results of that available to industry. I work in a group that develops the software FPM, short for the Finite Pointset Method, which is mainly used for fluid flow simulations. Past and present applications include for example, airbag deployment, glass blowing and flow of rain water on and inside a car. On any given day, I might be implementing a new feature for our software, providing support to users, or meeting with clients about new projects.

You’ve worked in Germany and the UK. How are the cultures different?

I’m not sure whether the differences in work culture between my time in Oxford and at ITWM are due to the different countries or because of the difference in academic vs industrial context. Oxford seemed more informal to me. I was on a first name basis with pretty much everyone soon after the first contact, be it in person or via email.

While this is also true for my colleagues and some of the external people I work with, Germans generally stick to surnames and titles for a longer time, such as the difference in typical project lengths (a few months vs several years) and the type of business travel (conferences that you know about months in advance vs client meetings at a few days’ notice).

Apparently, I also never fully got rid of the German habit of writing long, convoluted sentences..!

Maths is known as a male led area. How do we change this?

I wish I knew the golden formula for encouraging girls and women to study maths and also keep doing it. I do believe that making women in maths (and STEM in general) more visible to break stereotypes is at least part of the solution.

There are several great projects trying to do just that, such as this place, the German online mentoring website www.cybermentor.de that I’ve been part of for several years now or the Stemettes that I unfortunately only found out about just before leaving the UK.

Who are your female role models in maths?

I can’t remember knowing of any female mathematician when I was in school and there were no female maths professors teaching at my undergraduate university at the time, but I’m very happy to have met several amazing female mathematicians since then, through my work, studies and mentoring. I’d say that all of them are role models for me, because they show that – of course – women can do maths just as well as men.

What was the best advice you received as a woman in maths?

I cannot remember much specific advice I’ve received as a woman in maths, but I do remember Ian Stewart’s “Letters to a Young Mathematician” ringing very true when I read that as a student. I should probably pick it up again soon.

What is coming up next for you and Fraunhofer ITWM?

Having been at the Fraunhofer ITWM for only a year now, I intend to stay here for a while longer, to learn and to help get our software used to solve problems in even more applications. Then I’ll see what new opportunities show up for me.