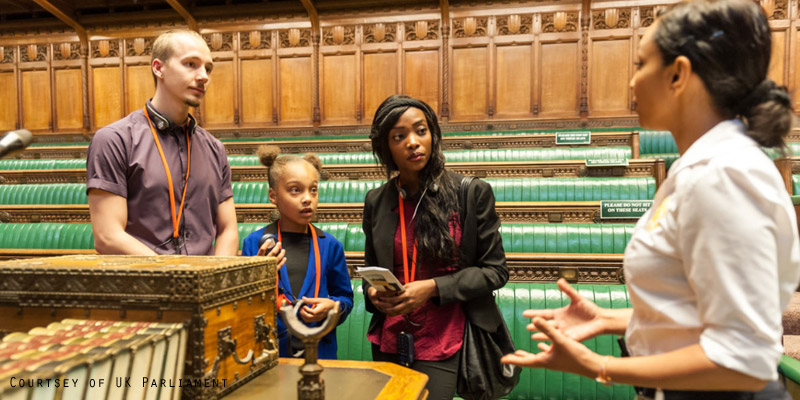 “…Come and watch a debate, campaign or lobby your MP. We really want you to get involved – it is your Parliament after all…”

Working at the Houses of Parliament in a job I love

I have worked in the Houses of Parliament for just over 28 years. I applied to an advert in the Daily Mail to work as a Secretarial Assistant in the Fees Office, when I was just 17. I have had many roles within Parliament over the years, in different departments. I once left to work locally, but missed the people and Palace so much I returned to work here. I love the work, history and art within Parliament and feel lucky and privileged to share it with others. 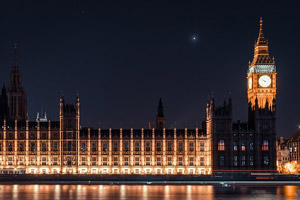 My current job is as a Diversity and Inclusion Assistant within Visitor Services. I am also parliamentary tour guide. History, customer service and diversity and inclusion are my three main passions. I am in my dream job as it ties all these things together. My job involves helping to make Parliament as accessible and diverse as possible. I try to break down the barriers that make people think Parliament is not a place that they could come to visit and / or work in.

Touring the Houses of Parliament

The Houses of Parliament is running a season of Suffragette themed tours and events until 6th April 2016. There are two types of tours. These are:

Designed especially for families visiting Parliament, the afternoon begins with a one hour tour led by a Visitor Assistant through the House of Commons and the House of Lords. The ‘Votes for Women!’ family tours are ideal for children aged 7 and over.

Hear and see where about a suffragette who chained herself to the railings that are now outside the Parliamentary post office. Learn about the struggle for votes for women. Learn about women as MPs in Parliament.

The tours are followed by a range of optional ‘Votes for Women!’-themed family activities.

‘From Petitions to Prime Minister: A Short History of Women in Parliament’ Guided Tours

Led by a Blue Badge guide, this 90 minute guided tour through the House of Commons and the House of Lords focuses on the journey from early petitioning for women’s suffrage through to the Women’s Social and Political Union (often known as Suffragettes) led by Emmeline Pankhurst and her daughters, Christabel and Sylvia, at the beginning of the twentieth century. After peaceful methods of campaigning had failed to bring about any result, the movement became more violent. Women householders over the age of thirty finally gained the vote in 1918. Hear the journey from then to the UK’s first (and so far) only female Prime Minister and the prominent role of women in Parliament today.

These guided tours run on Saturdays throughout February and March, and on Wednesdays 30th March and 6th April, starting at 1pm. Tickets are adults £25, concessions £20 and children £10.

The filming of Suffragette

Suffragette was the first feature film for many years that was allowed access to the building, and in my humble opinion, rightly so. I remember working in the ticket office on the Saturday as it was being filmed. I wandered over at lunch time and saw all the actors in period dress, the horses and classic cars, it was exciting. This film is so significant to Parliament’s history as it tells the story of women’s fight to vote. It also reminds us that less than 30% of MPs are women, although this figure is increasing at each election.

A plea to young school councillors (especially young women): We need you as parliamentary role models of the future, please do not rule out politics as a career choice. We need to be representative of the society so we actively encourage representation from black and minority ethnic, disabled and LGBT communities too.

It is delightful to watch the public’s reaction whilst touring the Houses of Parliament. Our customers say that the building is stunning and often say they can feel the history surrounding them. The suffrage story is one of shock and surprise. Shock at how radical and militant the Women’s Social and Political Union were. Some people don’t realise how far women went to achieve the same rights as men. Women were imprisoned, went on hunger strike and were force fed. Surprise at how many women and men lobbied and campaigned for and against the idea. Many people who didn’t want women to have the right to vote (including women).

It has only been in my lifetime, that the Representation of the People Act in 1969 extended suffrage to 18, 19 and 20 year olds. Previously, only men and women aged 21 or over were permitted to vote.

Get involved and use your democratic right

I find it sad that people often now do not vote at all. Please, use your democratic right to vote. After all, suffragette Emily Wilding Davison lost her life being knocked down by the King’s horse in the Epsom Derby in 1913. The saddest statistic I share is that more people voted in X Factor than the last General Election.

We run many events, talks and tours all year around. Keep an eye on the web site for further details: www.parliament.uk/visiting.

Coming up we have Disabled Access Day on Saturday 12th March 2016, where visitors can learn about our tactile tours for visually impaired and our British Sign Language screen-based tours for those who are deaf or hard of hearing. We have a hearing loop and step free access (we have been creative with a historic building!). We have a guided tour with a British Sign Language interpreter on offer that day (and any day with enough notice). We welcome assistance dogs and have wheelchairs to borrow for the duration of your visit. We have accessible toilets including one that meets the ‘Changing Places’ standard.

Our Visitor Assistants are friendly and welcoming and are happy to answer any questions you may have. Come and watch a debate, campaign or lobby your MP. We really want you to get involved – it is your Parliament after all.

Working at the Houses of Parliament

If I can work at Parliament, anyone can!