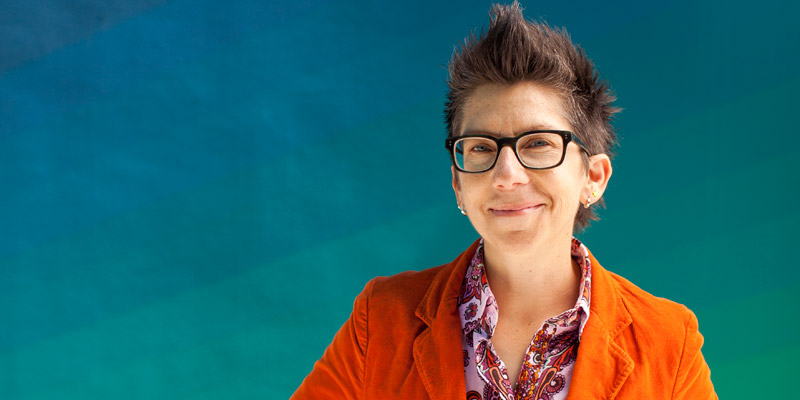 Tania Katan is an award-winning artist, writer, performer who works for Arizona-based agile project management software company, Axosoft. She believes in storytelling at all costs, working with innovative organisations because she says, “every rock star company needs a punk!” She launched the Axosoft #ItWasNeverADress campaign at the Girls in Tech Conference in Arizona on 27th April 2015 to break down barriers and shift perceptions of women in technology and all the spaces they occupy, with #ItWasNeverADress reaching 18 million Twitter impressions in little over a week after it launched. 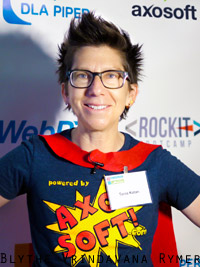 “…Recently, I attended a talk by artist, Micol Hebron, who was discussing the lack of women artists represented in art galleries and museums and she said, “If you DON’T see something, say something.” I LOVED this, because it empowers us to look at what isn’t there…”

Tania, we’ve heard from you before about your campaign, #ItWasNeverADress. For those of our readers who missed it, please could you summarise the background?

You should know that at Axosoft we make an agile project management software for software developers. This is key, because we had no right creating a campaign that, um, didn’t sell software! However, the agile part is why we did it. Agile methodology, which mimics our culture here, is all about collaboration, iteration, and addressing cross-functional problems with cross-functional problem solvers. 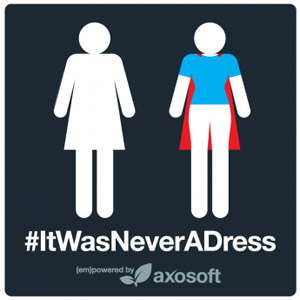 Our CEO, Lawdan Shojaee, had a problem that she wanted my colleague, Sara Breeding, and me to solve: How do we get more women in technology. The solution: If we can see women differently, we see the world differently. So, we sought out to create a campaign to see, hear and celebrate women for the superheroes every single day. That’s how #ItWasNeverADress was born!

You’ve spoken to us before about the difference between looking and seeing when it came to #ItWasNeverADress. How do we get people to actually see more instead of just looking in different parts of the world?

There was a campaign that homeland security launched right after 9/11: If you see something, say something. This was to empower citizens to point out “suspicious activity.”

Recently, I attended a talk by artist, Micol Hebron, who was discussing the lack of women artists represented in art galleries and museums and she said, “If you DON’T see something, say something.” I LOVED this, because it empowers us to look at what isn’t there, what is missing from the picture, who is missing from the picture, the boardroom, and it implores us to say something about it.

This quote from poet and activist Audre Lorde says it beautifully, “When we speak we are afraid our words will not be heard or welcomed. But when we are silent, we are still afraid. So it is better to speak.”

How is Axosoft marking International Women’s Day this year?

We’ll be offering a webinar as well as a live creative writing workshop called: [Em]power Hour: It’s time to find your voice. We’ll give participants prompts and exercises for creative engagement. It’s open to ALL people, everywhere in the world!

You recently did a TED talk. Please can you tell us about this?

It was such an honour to be invited by North Carolina School of Science and Mathematics to give a TEDx talk! One of the board members saw me speak at the Business of Software in Boston and recommended me for the series. Finding the threads that connect creative thinking, to software development, to theatre, to gender equity … was such a generative challenge! I was also luck enough to share the stage with two students from the school as well as New York Times bestselling author and social scientist, Vanessa Woods.

The talk has been featured on Amy Poehler’s Smart Girls website. Please can you tell us more about Smart Girls and why its ethos resonates with you?

I. LOVE. Amy Poehler’s Smart Girls! They are doing something super radical: celebrating smart, and wildly funny, girls and women. They’ve figured out the magic of humour. Humour springs from moments of fear, discomfort, otherness, and somehow allows us to feel less fear, discomfort and otherness. Humour is magic and Amy Poehler’s Smart Girls are magnificent magicians!

Who are your role models and why?

I’ve always looked up to funny smart strong humans who use their voice in service of entertaining and illuminating: Gilda Radner, Tracey Ullman, Natalie Goldberg, Joelle Katan (my mom). Oh, and don’t even get me started on all those who explore the connections between creativity and being present; where would we be without Thich Nhat Hanh and Gail Sher?! Ok, I’m quitting while I’m ahead!

Well … I get to evangelize about a cool new software we’ve just launched, GitKraken. Among other features, it allows users to undo commits. [In computing terms, a ‘commit’ is a permanent change.] Can you imagine if, in real life, we could undo commits??!! This marriage isn’t exactly as fantastic as I thought it would be…UNDO!

I’m thrilled to announce that my speaking schedule is delightfully robust in the US, however, if you invite me to the UK … I promise to take you all out on the lash and even sneak in a cheeky Nando’s. Top banter included!