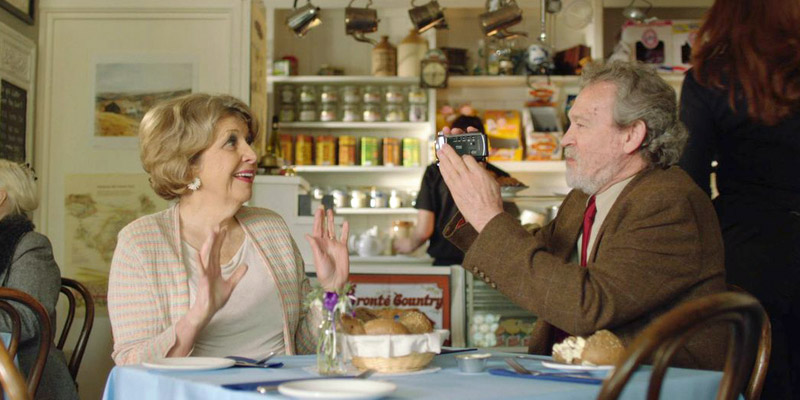 Janet Harrison is a film producer, writer, businesswoman and founder of the comedy network, COFILMIC, which showcases fresh new comedy talent. In late 2015 she became Event Coordinator for WFTV [Women in Film and Television] network for the North of England. Prior to working in film, Janet had spent 22 years in the insurance industry.

“…I always say to people: “Just do it!” Access to equipment, facilities and talent is the easiest it has ever been and you can have a worldwide audience if you post the content online!..”

Creative itch: From 22 years in the insurance industry to a new career in film

I didn’t intend to be in the insurance industry for 22 years. That was something I fell into. I used to do a lot of acting when I left school, and I always thought that I was eventually going to be discovered one day, but it never happened!

I left the insurance industry and started several small businesses. Whilst that was great, I realised that I hadn’t done anything creative for such a long, long time, and I still had that creative itch. So I took a screenwriting course locally in Manchester, and the upshot of that was to write a ten-minute short film, called Master Motivator.

Despite not knowing many people, I called in favours and managed to attract John Henshaw and even the original Mister Motivator made an appearance. Looking back at it now, it all looks very rough and ready, but it was my first short film and I loved making it. However, I found very few outlets to showcase the film, which is why I set up COFILMIC – at that time, the only comedy specific short film festival in the UK. Now there is LOCO (London Comedy Film Festival) too.

Setting up COFILMIC to focus on comedy

COFILMIC is a network for people who have an interest in making comedy. It is about people in TV, film and live performance coming together to make contacts and collaborate to make content.

During our first three festivals, we had some high profile comedy industry guests such as TV producer Charlie Hanson (Extras, Life’s Too Short, Garth Marenghi’s Darkplace), Henry Normal from Baby Cow and many other experts on hand to contribute and support grassroots talent.

We offered scriptwriting competitions where the winning piece would be made into a short film and I subsequently produced those films. The most recent is Tea Time in Haworth, by writer Chris Smith. It starred Anne Reid and Paul Copley (pictured in the main image above). That was probably one of the best films I’ve made so far in terms of quality, even on a tiny budget.

This year, I am running a smaller COFILMIC screening event and will be opening submissions within the next month. However, this time, I’ll just be asking for films made in the North. The event will also include an industry discussion with a prestigious panel who will also judge the films.

COFILMIC also incorporates Sketch in the City, based at the Three Minute Theatre, which is produced by Michael Jacob – an ex BBC Executive Producer who worked on TV comedies such as Birds of a Feather, The Smoking Room and many others. We ask writers to send in comedy sketches and shortlist the best five or six to be acted out live by The Urmston Unusuals alongside a selection of their own sketches. We have an audience vote and the best two will join other winners in a Sketch Off event at the end of the year, where there’ll be an overall winner.

Submissions are now open for three minute comedy sketches (only one allowed per person, maximum three pages) and should be sent to scripts@cofilmic.co.uk. The next Sketch in the City showcase will be on 7th April 2016. Make them funny!

I’ve been running COFILMIC for a number of years now, which has taken the focus off my own writing. To rectify this, I had an idea for a dark comedy short called To Die For, which I co-wrote with Rima Sen and David Isaac. It won a Bath Film Festival / IMDB award last year, so we now have some prize money to make the film which will be shot in April.

In its most basic form, a short film is your calling card, however, the films themselves aren’t particularly commercial (i.e. they don’t necessarily make money in their own right).

There’s so many rules attached to film festivals, even for shorts. Some festivals need the film to be premiered at their event, or say that you can’t have the film publicly available. This leads film makers to feel that putting it straight online and trying to find a following through social media channels is a better way than entering costly festivals.

The challenge is that on You Tube and Vimeo, there are gazillions of films available, so how to you get people to watch your content? There are now companies that are looking for short form content to populate their channels and comedy is very popular with brands. This will increasingly lead to more opportunities for film makers.

Wildseed Comedy was set up by Miles Bullough (previously of Aardman). They are actively looking for Internet based comedy and sci-fi content. I have no doubt there will be more to follow. Nick Bowe, a previous COFILMIC winner and talented animator now works with Wildseed on his own series, Ball Street.

The benefits of a business background

I didn’t really intend to be a producer, I started out thinking I’d really like to write, but because I’d maybe had a bit more business experience than others, I ended up doing the practical stuff and producing.

Film makers need to focus on what funders will want from the film commercially (i.e. the return on investment). It’s very difficult with creative projects as they are not always particularly commercial. They also must consider whether there is an audience for the project and who that audience is.

Addressing underrepresentation of women in film and comedy

Film support organisations such as Creative England and the BFI [British Film Institute] do have a remit to nurture people under- represented in the industry (hence initiatives to support female film makers). Obviously WFTV have some great mentoring opportunities and bring women together from all levels within the film and TV industry to network and collaborate – which is why we need them in the North too!

With women, it all boils down to confidence – or the lack of it. I think tackling the confidence issue is the biggest challenge. Initiatives are fantastic, but if women don’t feel confident enough to put themselves forward there will always be a shortage of female talent.

Through WFTV in the North, I hope that women can come together, share ideas and help build their confidence too.

We opened up our first WFTV event in October to members and non-members. It was a very empowering session as women felt they were able to voice their opinions in an open environment and got a great deal of support from the other people attending.

We had a pitching skills session last week run by Nick Wild, an investor and experienced producer. It is certainly not like we’re wanting to exclude men altogether.

Women in Film and Television events in the North of England

This year the events will be open to members only. We hope to grow the membership here and have a full schedule of events planned over the next 12 months, including smaller sub-groups for specific areas. One is Women in Tech and we are also hoping to start a writers group too.

There will be some very high profile women from all areas of TV and film invited along to each of the themed sessions and share their knowledge and expertise.

The next one is on 19th April and the theme is ‘Creating Female Narratives’. This will be a fantastic session for anyone creating female characters and learning from Northern writers who have successful TV careers as writers of popular dramas and comedies. Susan Nickson will be joining us (the writer of Two Pints of Lager and a Packet of Crisps).

The one after that is on the 4th July, and the subject matter is ‘Interviewing skills for TV Journalists and Documentary Makers’. It’s about getting the best out of people that you’re interviewing for a documentary or in a one to one situation. Again, we’ll have some stellar names attached to that panel too.

For details of how to join, see here: http://www.wftv.org.uk/become-a-member

Advice to girls and women who want to get into film and comedy – “Just do it!”

I always say to people: “Just do it!” Access to equipment, facilities and talent is the easiest it has ever been and you can have a worldwide audience if you post the content online! 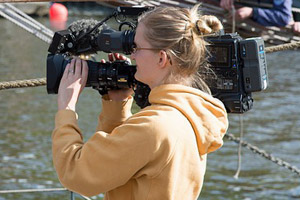 So, you might as well take the plunge and make something.

When I look back at my first film, despite having some great people acting and directing, it was still a first attempt on a seriously low budget. But it gave me the confidence to learn from my mistakes and improve on that the second time and so on.

Comedy is also a particularly tricky genre because it is so subjective. What you find funny I might not and vice versa. That said, if you can make people laugh and you make a good comedy film, then you will certainly be in demand. Everyone from Film 4 to the BBC are looking for good comedies with authentic characters.

The acid test – putting your work out there

It’s the acid test. You might feel a bit foolish (or you might just be absolutely fantastic and fly on your first attempt) but you will soon get to know whether you have an aptitude for writing, directing or producing. Many people say they are film makers or writers but never actually do it.

What’s the worst that can happen!?